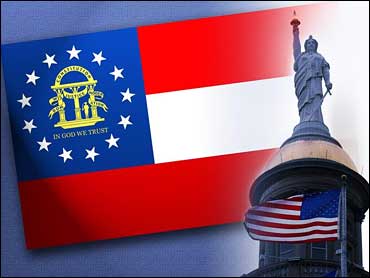 Gov. Sonny Perdue signed a bill Thursday to replace the unpopular 2-year-old state flag with a simpler design that does not include a Confederate battle emblem.

The new flag, inspired by a national Confederate flag but without the divisive Dixie cross of stars, was raised over the Capitol for the first time shortly after the governor signed the bill.

"The flag the General Assembly adopted honors Georgia's past," Perdue said before signing the bill. "It is also a flag that will allow us to move forward together."

The flag displays the state's coat of arms and the words "In God We Trust" on a blue corner in the top left, with three red-and-white stripes to the right.

The 2001 flag was called a political masterstroke when it was adopted, replacing a divisive banner dominated by the Confederate battle cross.

But the closing hours of Georgia's shortest-lived flag brought little in the way of fond farewells. Even some of the architects of the 2001 flag gave it a curt obituary.

"In no way am I sad that flag is being retired," joked Rep. Tyrone Brooks, a black Atlanta Democrat who led the charge to adopt it two years ago. "It's not exactly, you know, anybody's dream flag."

The brief-flying state flag was a compromise intended to shrink the Confederate emblem but incorporate the symbol in a mini-montage of old Georgia flags.

The result was what many considered a visual train wreck of words, seals and stars.

The flag was voted the nation's ugliest by a group of flag experts just five months after it was adopted. Southern heritage groups started calling it a "rag." Schoolchildren couldn't draw it. Around the Capitol, it was commonly referred to as looking like a place mat from a Denny's restaurant.

As lawmakers wrangled for months over changing the state flag this winter and spring, a rural Democrat summed up Georgia's frustration with the 2001 banner.

"I've never seen anybody flying it!" cried Rep. Larry Walker, of Perry, south of Macon. "You ever seen it on a boat? You ever seen it at a football game? Nobody flies this thing!"

Georgia's latest flag saga started last summer, when a rural Republican — Perdue — started talking about it in his underdog campaign to oust Democratic Gov. Roy Barnes. His promise of a statewide vote on the flag figured prominently in his surprise victory in November.

Perdue originally wanted a vote on the 1956 flag with its dominant Dixie "X" — adopted by an all-white Legislature at the height of Southern resistance to integration.

But after months of arguing, lawmakers decided to quash any chance of the Confederate emblem's revival and drew a new flag instead. Perdue agreed to the compromise.

Civil rights groups had threatened an economic boycott if Georgia revived the Dixie cross, which many blacks lawmakers call a symbol of oppression. Southern heritage advocates, on the other hand, called the new flag a betrayal.

Georgia voters will still get a referendum next year — to pick between the new three-stripe flag and the 2001 flag. Few give the 2001 flag any chance to win.

"It's a flag that Georgians didn't warm up to," said Merle Black, a political scientist at Emory University. "They just didn't embrace it. Very few people ever bought that flag except the ones that had to, schools and so on."

Perdue said he was not completely satisfied with the bill because it did not give people a chance to vote on restoring the 1956 state flag.

"While this bill does not include everything I asked for in my plan, I will respect the decision of the elected representatives of the people of Georgia," Perdue said.

Even critics of the 2001 flag's design acknowledge that it served its purpose as a transition piece that made the replacement of the 1956 flag possible.

And Barnes, whose official portrait in the Capitol shows him in front of the 2001 flag, he has no regrets.

"The important thing was to remove the Confederate emblem from its position of prominence," said Bobby Kahn, Barnes' chief of staff. "That was the important step. And we're still proud of that."