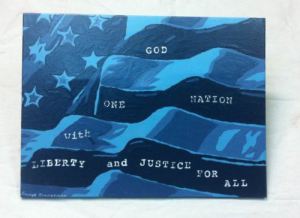 SANFORD, Fla.– An original piece of artwork painted by George Zimmerman is selling for nearly $100,000 on eBay only a day after it was put up for sale.


As of Tuesday morning, there have been 98 bids placed on the piece listed as “therealgeorgez.” The starting price was listed as only 99 cents before it skyrocketed to $99,966 hours later.

Zimmerman’s piece is a canvas painting of the U.S. flag in different shades of blue with the words “God, One Nation, with Liberty and Justice for All” in white letters on the flag’s darker shades of blue stripes.

The description of the painting states: “First hand painted artwork by me, George Zimmerman. Everyone has been asking what I have been doing with myself. I found a creative, way to express myself, my emotions and the symbols that represent my experiences. My art work allows me to reflect, providing a therapeutic outlet and allows me to remain indoors. I hope you enjoy owning this piece as much as I enjoyed creating it. Your friend, George Zimmerman”

Two prospective buyers asked Zimmerman a question regarding the size of the painting. Zimmerman responded to the questions saying the painting is 18” x 24” and that it is signed by him.

A third person who also wrote in the “questions about this item” section said, “Just wanted to tell you we all love you and stand behind you. You have so many people on your side I hope you know that!.” Zimmerman responded, “Thank you so much for the words of kindness and support. I do know how many great Americans are still here, I run into at least 3-5 a day that go out of their way to tell me the same.”

He signed all three responses as, “Your Friend, GZ @therealGeorgeZ.”

Zimmerman’s brother, Robert Zimmerman Jr., confirmed to News 13 that the piece was painted by his brother.

Zimmerman was acquitted in the 2012 shooting of Trayvon Martin this past summer. The 30-year-old Zimmerman had faced charges of aggravated assault, battery and criminal mischief following a Nov. 18 confrontation at the central Florida house he shared with his girlfriend, Samantha Scheibe. She initially told police Zimmerman pointed a shotgun at her face during an argument, smashed her coffee table and pushed her out of the house. Charges were dropped after Scheibe refused to pursue the case and there was scant evidence of a crime.

In September, Zimmerman was accused by his estranged wife of smashing an iPad during an argument at the home they had shared. Shellie Zimmerman initially told a dispatcher her husband had a gun, though she later said he was unarmed.

No charges were ever filed because of a lack of evidence. The dispute occurred days after Shellie Zimmerman filed divorce papers.

Zimmerman has also been pulled over three times for traffic violations since his acquittal.