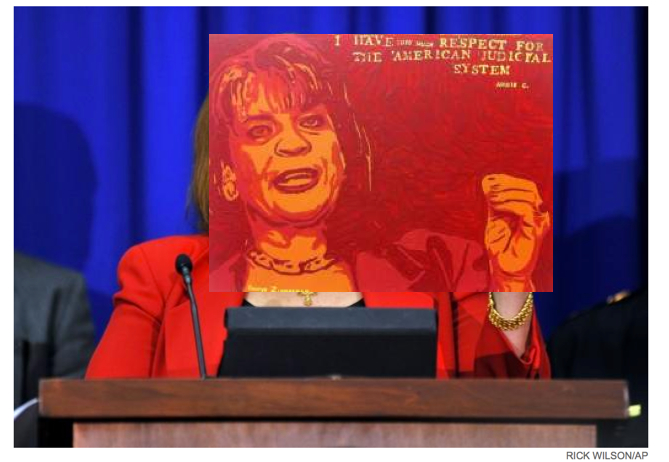 George Zimmerman may face a lawsuit over a painting he created that is drawn from a photograph by Associated Press photographer Rick Wilson – but judging by his response on Twitter, the former neighborhood watch volunteer doesn’t seem too concerned.

Zimmerman, who was acquitted of second-degree murder in the shooting death of Trayvon Martin last year, is selling a painting that depicts Florida State Attorney Angela Corey, accompanied by the text: “I have this much respect for the American judicial system. – Angie C.”

Angela Corey prosecuted Zimmerman, who shot and killed the unarmed teen on Feb. 26, 2012.

“Rick does have royalty rights and other rights to that photo,” says Phillips. “If Mr. Zimmerman decides he is not accountable, he will be reckoned with.”

On Friday afternoon, Zimmerman, tweeting under the handle @therealGeorgeZ sent a tweet that read:  “No worries AP, I'll just take whatever U sue me for off your tab when I'm done suing you :-) Or... I could put out how much U offered me 2..”

In 2011, artist Shepard Fairey settled a lawsuit with the AP over his use of a photo of then-presidential candidate Barack Obama to create a series of “Hope” posters. In 2012, Fairey was sentenced to two years probation and ordered to pay a $25,000 fine in a criminal contempt case involving his use of the photo.