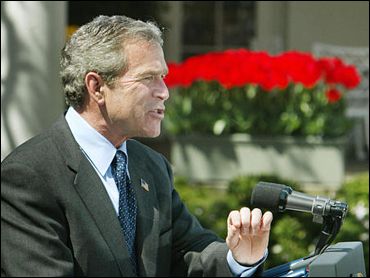 President Bush chose Tuesday, the tax-filing deadline, to demand at least $550 billion in tax cuts over 10 years, and said American workers and businesses need "every bit of that relief now."

"Instead of lowering taxes little by little, the Congress should do it all at once," the president told an audience in the Rose Garden.

The $550 billion figure is a retreat from his original proposal of more than $700 billion that reflected congressional reluctance to run up bigger deficits in wartime.

As CBS News Correspondent Bill Plante reports, the president hasn't talked publicly about the economy since the war began a month ago, but with his tax cut stalled, Mr. Bush kicked off a blitz of appearances by himself and his staff to push the tax cut through Congress.

The president's overall job approval rating in the latest CBS News/New York Times poll is over 70 percent - but he and his advisers never lose sight of what happened to the first president Bush after the 1991 Gulf War when he waited too long to pay attention to a stagnant economy.

So, with the war winding down, the president will quickly switch gears to persuade the public and Congress that the nation needs his tax cuts.

Mr. Bush said the economy has a "great deal of unmet potential."

The plan has drawn opposition not just from most Democrats but from moderate Republicans who cite rising budget deficits and unknown costs from the war in Iraq.

The White House had initially asked for $726 billion in tax cuts over 10 years. The House, which sought $550 billion, came closer to President Bush's request. But the Senate cut the president's request by more than half, approving just $350 billion.

The vote last week in the Republican-controlled Senate, which required Vice President Dick Cheney's tie-breaking vote, stung the GOP president at a time of war.

While Congress is in a two-week recess, the president is sending 25 administration officials out to 57 events in 26 states to promote his tax-cut plan. As the president spoke in the Rose Garden, Deputy Commerce Secretary Sam Bodman was to highlight the Bush tax package at a chamber of commerce luncheon in Portland, Maine, the home state of moderate GOP Sen. Olympia Snowe, who has vowed to block any more than $350 billion in tax cuts.

Mr. Bush also faces a skeptical public. Six in 10 Americans say this is not the time for more tax cuts, which they fear would worsen deficits, an Associated Press poll found. Still, half say their taxes are too high.

White House press secretary Ari Fleischer on Monday said the administration was not embracing the $350 billion figure and was confident it could get Congress to approve a figure closer to the president's request.

"If the economy had dramatically improved to the point where fewer jobs need to be created, or less action was called for, that might be one thing," Fleischer said. "The economy has not gotten to that point. So from an economic, job-creating point of view, stepping backward from the president's proposal for jobs and growth is the exact wrong remedy for people who seek work."

"The bigger the figure, the more jobs created," Fleischer said. "Smart Congress-watchers know there are all kinds of ways to deal with these numbers."

On Wednesday, the president will sign a budget measure to finance the war and rebuilding program in Iraq and anti-terror efforts at home. Then he is to fly to St. Louis to tour a Boeing Co. factory, where he is expected to talk about Iraq, his budget request and the economy.

President Bush's trip to St. Louis marks the first time in nearly two months that he will have hit the road exclusively to promote his economic plan. His travels have been devoted to meeting with foreign leaders on the Iraq crisis or visiting with U.S. troops and their families.

From St. Louis, Mr. Bush travels to his Texas ranch. He is to spend five nights this week at his ranch, which he has not visited since February. It is his third straight Easter weekend in Crawford, Texas. He will host Australian Prime Minister John Howard and his wife at the ranch May 2-3. Howard was a staunch supporter of military action in Iraq and sent Australian troops to support the U.S.-led coalition.