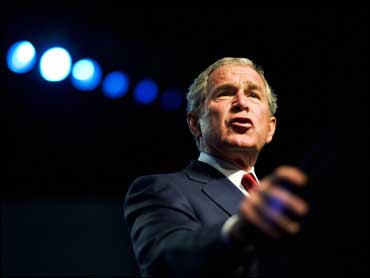 It was three years ago tonight that Pres. Bush accepted his party's nomination for a second term. He did so in a speech rife with promises.

More than any other address he has given since, including his Inaugural nearly 5 months later, that speech to the 2004 Republican National Convention laid out his plans for his second term.

But three years after the fact, an examination of that speech shows that Pres. Bush has been unable to deliver on most of his pledges. That's not to say he didn't try. But he didn't prove to be a closer.

"We must strengthen Social Security by allowing younger workers to save some of their taxes in a personal account -a nest egg you can call your own, and government can never take away," he told GOP delegates that night in Madison Square Garden.

He waged an aggressive campaign for his plan to let American workers contribute some of their Social Security taxes into a private retirement account that he expected would give a better rate of return than the government-run plan.

During the first six months of his second term he gave 38 speeches in 29 states on behalf of his Social Security plan. But to no avail.

He acknowledged that Social Security is regarded as the third rail of American politics. And he was definitely shocked by the depth of resistance to the changes he advocated, even among members of his own party.

Before the year was out, he had given up on his plan.

He didn't try as hard on another of his convention pledges.

"In a new term, I will lead a bipartisan effort to reform and simplify the federal tax code," Mr. Bush had pledged. He called the tax code "a drag on the economy" and "a complicated mess."

He started out trying to be faithful to that promise. Even before his second term began, he appointed a bipartisan panel to study the code and recommend changes to make it more simple and fair.

The panel delivered its recommendations on November 1, 2005. But they've been gathering dust at the Treasury Department ever since. Mr. Bush never acted on them and almost never mentions the subject of overhauling the tax code.

In his convention speech, he promised to create jobs by encouraging investment, restraining federal spending, reducing regulation and making his tax cuts permanent.

Just last week, Mr. Bush boasted that since August of '03, 8.3-million new jobs have been added to the nation's payrolls. Democratic critics argue that he fails to deduct the number of jobs lost, which would diminish Mr. Bush's claim.

And despite the volatility on Wall Street, there's no question that investments are booming.

As for federal spending, the size of the annual federal deficit has been coming down since reaching a high of $413-Billion in 2004. The Administration forecasts a deficit this year of $205-Billion. The forecast from the Congressional Budget Office is lower still at $158-Billion.

But the size of the National Debt has soared. It now stands at $8.9-Trillion dollars - numerically in excess of the debt ceiling authorized by law. On the day Mr. Bush took office, it was $5.7-Trillion. That's a 57% increase on Mr. Bush's watch. Treasury Secretary Henry Paulson is already calling on Congress to hike the debt ceiling as soon as possible for the fifth time in six years.

As for making his tax cuts permanent. It's a guaranteed applause line in Mr. Bush's political speeches, but with democrats in control of Congress, the prospects aren't promising.

As for some other promises Mr. Bush made in his acceptance speech:

He vowed to create American opportunity zones. A White House spokesman could cite only one established in this second term. It's the Gulf Opportunity Zone established as part of the rebuilding program after Hurricane Katrina.

Mr. Bush pledged to double the number of people served by "our principal job training program and increase funding for our community colleges." There's more funding for the schools, but the job training pledge fell short of Mr. Bush's goal.

He promised that in a new term, "I will ensure every poor county in America has a community or rural health center." A spokeswoman for the Health Resources and Services Administration says that of the 200 high-poverty counties, grants for health centers have been disbursed to 79 of them. The 2008 budget contains funding to bring the number of such counties served to 120 - still short of Mr. Bush's pledge.

The President vowed to "change outdated labor laws" to offer the options
of comp-time and flex-time in lieu of overtime pay. Such changes have yet
to be enacted.

His efforts to win reauthorization of his "No Child Left Behind Act" have also yet to be realized and congressional opposition to the program is substantial.

Mr. Bush spent much of this year pursuing so-called reform of the nation's immigration laws. Like his efforts on Social Security, he encountered a wall of resistance and had to give it up. In fairness, the President never mentioned the immigration issue in his convention speech three years ago.

So much for the "political capital" Mr. Bush spoke of two days after his re-election.

"I earned capital in the campaign, political capital, and now I intend to spend it. It is my style. That's what happened in the -- after the 2000 election, I earned some capital. I've earned capital in this election -- and I'm going to spend it for what I told the people I'd spend it on, which is -- you've heard the agenda: Social Security and tax reform, moving this economy forward, education, fighting and winning the war on terror."

Mr. Bush asserts the U.S. is winning the war on terror, but it's an open-ended commitment with no end in sight.

Asked to explain the difficulty Pres. Bush has had in delivering on the promises he made, White House spokesman Scott Stanzel pointed to Congress. At first it was closely-divided and now, he says, it's in the control of Democrats.

In such a circumstance, he said "achieving significant policy reforms can be a real challenge."

"At the end of the day," said Stanzel in a statement to CBS News, "when Congress finally takes on these big issues in a serious manner, the result will likely look much like what the President proposed."

He said the defeats would not stop Mr. Bush from tackling the big issues. "He will continue to do so until his last day in office," said the spokesman.

We'll check again in 16 months and 18 days - the amount of time left in Mr. Bush's presidency.