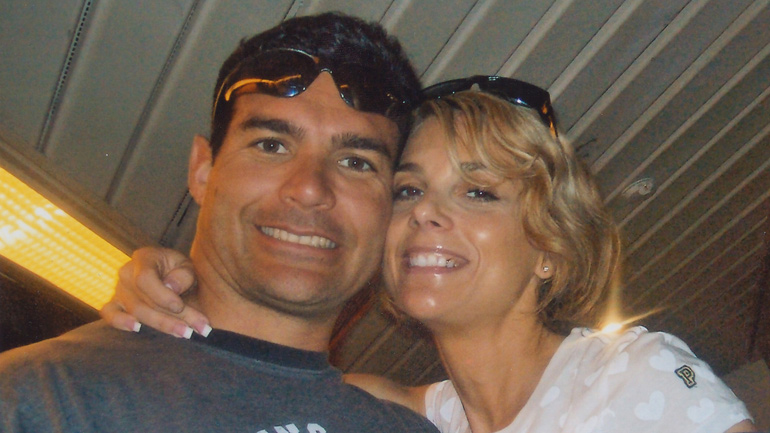 LAS VEGAS -- George Tiaffay, the former West Point grad and Las Vegas firefighter who was found guilty of hiring a homeless man to kill his estranged wife, was formally sentenced to life in prison without parole plus a maximum of 81 years by a Clark County judge Tuesday.

Tiaffay was convicted of first-degree murder in September 2015 for the bludgeoning of his wife Shauna Tiaffay in her suburban Las Vegas home. Shauna Tiaffay, a mother and a cocktail waitress at the Palms Casino, was brutally beaten on Sept. 29, 2012 by Noel Stevens, a homeless man who admitted he killed Shauna because George Tiaffay paid him $600 to do it.

Tiaffay was sentenced in September to life in prison. The jury decided that Tiaffay and Stevens conspired to kill Shauna Tiaffay.

Tuesday, the judge sentenced Tiaffay on the six other charges of which he was convicted in September. The judge tacked on maximum consecutive sentences for conspiracy, burglary and robbery, totaling 32 to 81 years.

Some of the most damaging evidence against Tiaffay was surveillance video showing the two men purchasing the murder weapon -- multiple hammers at various Las Vegas stores.

The various hammers were decided on when Tiaffay allegedly explained to Stevens that he was afraid that a wooden hammer might break upon impact. Clark County Superior Court Judge Eric Johnson said that Tiaffay was "pure evil" for considering this situation when contemplating purchasing multiple hammers. He said Tiaffay's prior good acts did not outweigh his decision to plot the murder.

Shauna's sister Paula Stokes Richards tearfully read a letter to the court that was written by her mother about Shauna's death. Richards also said how much she regretted not being able to see the warning signs that her sister's separation from George Tiaffay could lead to murder.

George Tiaffay's sister, Maria McGrew, cried as Richards read about how much her sister is missed and how her niece will never get to know her mother.

Cindy Cesare is a "48 Hours" producer. "48 Hours" investigated the Tiaffay case in the episode, "Vengeance in Vegas."Watch the full episode online.