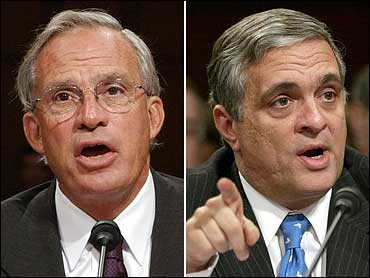 This column was written by Robert Dreyfuss.

There's no reason why Porter Goss, the embattled director of the CIA, can't declassify and make public the agency's internal investigation of its less-than-stellar counterterrorism accomplishments before September 11. And there's no reason why Goss can't reprimand any current or former CIA officers, including former Director George Tenet, if they deserve it. (Whether they in fact deserve it depends at least in part on what the report says.) But he won't.

The report, written by the CIA's inspector general, was commissioned by Congress in December 2002 and delivered to Congress last summer. Democrats, sensing yet another opportunity to tar George W. Bush with the intelligence community's failures, would love to have it made public — but Goss, and Republicans on the congressional intelligence committees, are content to sit on it. Since it was delivered, Goss has declared his opposition to releasing the report to the public, even in redacted form. Then, on Wednesday, the CIA announced that no disciplinary action would be taken against any of the 20 past and present CIA officials reported to have come under criticism in the report.

But there are several hidden crosscurrents at work.

First, since taking over at the CIA a little more than a year ago, Goss has wreaked havoc on an agency that has been considered enemy territory by the Pentagon and its neoconservative allies for the past four years. Since going to Langley, Goss — carrying water for the White House, which blamed the CIA for resisting its pressure to support the war in Iraq in 2002-03 and for refusing to drink the administration's Kool-Aid and engage in happy talk about the Iraqi insurgency during the 2004 election season — has shredded much of the agency's core capabilities, forcing many senior officers into retirement or exile. He is, according to insiders' accounts, isolated from the agency's top officials, holed up in his executive suite at Langley and surrounded by a snarling staff of former House aides who accompanied him to the CIA. As a result, Goss has no political capital left at the CIA, and he can ill afford to take gratuitous actions that would further alienate the CIA's professionals.

More importantly, however, Goss is treading lightly around Tenet. According to John B. Roberts II, a former aide to President Reagan who wrote an article last month for The Washington Times headlined "Potential Bush-CIA crisis," after the completion of the inspector general's report, Tenet wrote a detailed, 20-page rebuttal. Should Goss release the report, and especially if he were to reprimand Tenet and his top aides — including James Pavitt, former chief of the Directorate of Operations — it is likely that Tenet would fire back. And some of that fire could burn the White House.

When Tenet resigned from the CIA in June 2004, it was clear to all observers that the loyalist was taking one for the (Bush) team. By quitting and admitting some responsibility for the CIA's misguided conclusions about Iraq's nonexistent weapons of mass destruction, Tenet allowed the White House to blame the CIA for the fiasco. (It was, of course, heavy pressure from the White House, from Vice President Dick Cheney, and from the Pentagon that swayed the CIA in its Iraqi weapons-of-mass-destruction conclusions — pressure that Tenet caved in to.) To reward Tenet for his obsequiousness, Bush pinned a Presidential Medal of Freedom on his chest.

But if Goss were to slap Tenet with a reprimand, the Bush-Tenet gentleman's agreement of 2004 might unravel. According to Roberts, "Mr. Tenet's rebuttal to the report is detailed and explicit. In defending his integrity as CIA director, Tenet treads perilously close to affirming the account of Richard Clarke, the former [National Security Council] terrorism official whose public disclosure of the Bush administration's delay [early in 2001] in adopting a strategy against al Qaeda stirred controversy last summer." The last thing Bush wants now, as Iraq unravels, is for Tenet to renege on his Medal of Freedom deal and to start lobbing hand grenades at Bush's bungled war on terrorism. And the White House, which remembers the impact of Clarke's stinging allegations, wants that ugly can of worms to remain shut tight.

So Goss, ever the Bush hatchet man, has opted to let Tenet off the hook — at least so far. There's no telling if and when all or part of the report might see the light of day. If that happens, Tenet's rebuttal will make interesting reading.

Robert Dreyfuss is a Prospect senior correspondent. He covers national security for Rolling Stone and writes frequently for The Nation and Mother Jones.