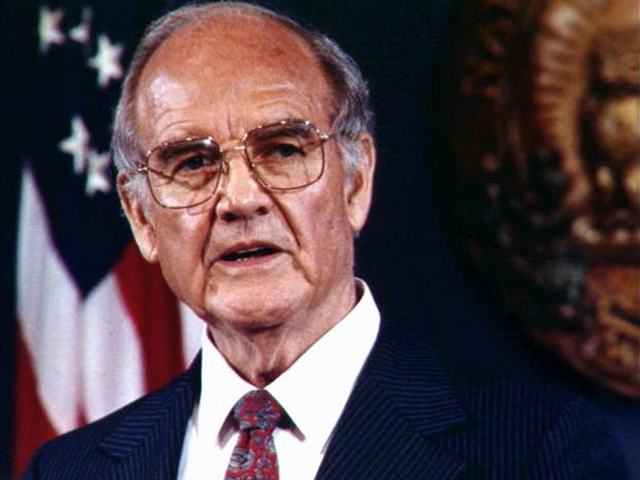 WASHINGTON Former Sen. George McGovern, the three-time Democratic presidential candidate who won his party's nomination in 1972 on an anti-war platform but lost in a landslide to President Richard Nixon, has died. He was 90.

McGovern represented his home state of South Dakota for more than 20 years, first in the House of Representatives and then in the Senate, where he championed liberal social and economic reforms.

"I accept your nomination with a full and grateful heart," McGovern told conventioneers when he won the party's nomination for president.

Gary Hart, who would go on to run for president twice himself, was McGovern's campaign manager. And a young future president, Bill Clinton, ran his campaign operations in Texas.

McGovern, an unabashed liberal, called for an immediate end to the Vietnam War.

But he lost in a landslide to then-President Richard Nixon after winning just one state, Massachusetts.

"We're not going to shed any tears tonight over the joys that this campaign has brought us," McGovern said in his concession speech.

One of the great ironies of that race was that Nixon ordered the break-in to the Democratic Party headquarters in the Watergate Hotel in 1972 because he feared being bested by whoever his Democratic opponent might be. That break-in led to his resignation just two years after overwhelming McGovern in the election.

Before entering politics, McGovern flew 35 combat missions as a B-24 bomber pilot during World War II and was awarded the Distinguished Flying Cross. He married his college sweetheart, Eleanor, during the war, and they had five children together. Eleanor died in 2008.

He was tapped by three presidents to represent the U.S. at the United Nations on issues ranging from disarmament to world hunger. He launched a program with former Republican presidential nominee Bob Dole in 2002 to provide education and food to poor children in the U.S. and around the world.

"There is one problem that I think we can lick, absolutely, and that's world hunger," McGovern said at a 2000 press conference with Dole.

McGovern was awarded the Presidential Medal of Freedom in 2000 and the World Food Prize in 2008.

He stayed active until the end, backing then-Sen. Barack Obama in the 2008 election.

"Let's seize that opportunity and vote Barack Obama for a more hopeful world," McGovern said at an Obama rally.

And he went skydiving in 2010 to celebrate his 88th birthday.

A prolific author, McGovern wrote eight books including, most recently, "What It Means to Be a Democrat" (Blue Rider Press), and almost no one knew better.