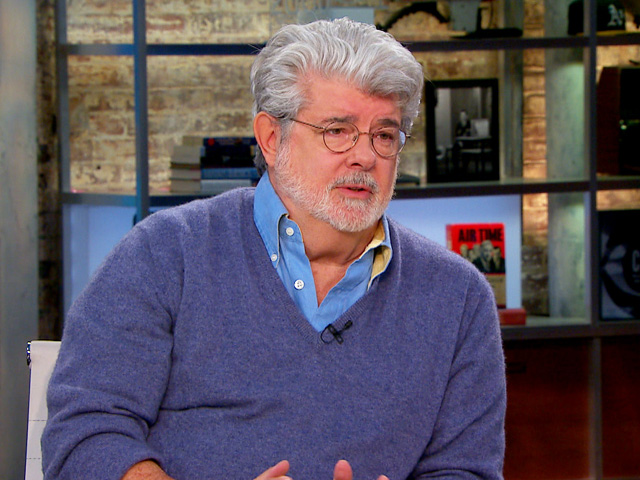 Famed director George Lucas is best known for "Star Wars," which wowed audiences with, among other things, its special effects. But, in a wide-ranging interview with Charlie Rose, Lucas says his latest movie, "Red Tails," about the Tuskegee Airmen, takes digital filmmaking to a new level. He also offers his views on capitalism, its impact on the U.S. system of government, and the democratization moviemaking is undergoing. And he names the person he considers the best moviemaker around. The transcript of the interview follows.

GEORGE LUCAS: Thank you. Great to be here.

ROSE: My impression is that this is a movie you've been waiting to make.

LUCAS: I've been working on this movie for 23 years.

LUCAS: Definitely a labor of love. But I've been working on it for 23 years. It's not that I've been sort of waiting to do it. I heard this story from an aviation and photographer friend of mine 23 years ago. And I said, "This is a fantastic story -- that needs to be told." And more importantly for me is that it sounds like a great, inspirational movie for teenagers.

ROSE: Who's your director?

ROSE: What's interesting with a movie like this is how real you can make what happens on the screen to reflect the reality of what it means to have your life on the line in the air, not knowing what's gonna happen and facing instant death.

LUCAS: Well, that's ultimately the story. And now, with digital technology, we can make it much more real. I'm a big fan of aerial combat, obviously, from "Star Wars." I've been doing it most of my life.

ROSE: Right. You know -- you know from aerial combat.

LUCAS: Yeah, and each time I do it, I get better and better at it. And once we got to digital, it got even better. And in the old days, when you did like, say, Battle of Britain was one of the last real --

LUCAS: -- combat movies made, you know. Two photographers died on that picture. It's very hard to get the planes to line up. It takes a whole day just to do one shot. And even then it's not that great, because you can't actually get where you want to get physically. So this is one of the first films where we actually were able to create the dogfight the way it really would be, and get you right into the seat and get you right into the action, which is where -- you know, it's unbelievably exciting.

ROSE: When you look at the movies you can make, I mean, what is it that turns you on beyond the things you've already said? What kind of stories, you know, appeal to George?

LUCAS: Well, there's the intellectual side of me, that wants to do more experimental films, which I haven't done since I did my first film, "THX," and my student films. And I -- that's now where I'm going is to try to get back to that. Then there's the -- I don't know -- the side of me that loves to watch an audience enjoy themselves and walk out of the theater skipping and saying, "That was a great experience. I feel better now."

ROSE: There's also the side of you that's a political animal. I mean, you are, among people who know you, a billionaire who's not that crazy about capitalism.

LUCAS: Well, I grew up in the '60s. I grew up in San Francisco. And so I'm informed in a certain kind of way about, you know, believing in democracy and believing in America. And I'm a very ardent patriot. But I'm also a very ardent believer in democracy, not capitalist democracy. And I do not believe that the rich should be able to buy the government. And that's just the way I feel.

(For Lucas' views on what an ideal society would be like, click on the video on the left)

ROSE: Is that the America you see, where the rich have bought the government?

ROSE: And will it change?

LUCAS: Well, I hope it changes. I mean, it's hard, because you got human nature. You got people -- you know, basically, it's all -- we got a country based on greed. And as long as you got that, then it's corrupt. And as long as it's corrupt, you're never gonna get a real meeting of the minds on what is best for --

ROSE: So why don't you make a film about the America that you are articulating? I mean, why don't you use the power of George Lucas to tell the --

LUCAS: I don't think I have that much power. I mean, I learned -- my first film was -- was kind of an indictment of --

ROSE: Could I show you a list of the 100 best films (LAUGH) and how many of 'em are made by George Lucas?

LUCAS: Yeah, but they're not made to -- they -- yes, they have a political undertone. I mean, especially "Star Wars" has got a very, very elaborate social, emotional, political context that it rests in. But of course, nobody was aware of that. Nobody says, "Oh my gosh." But if you actually watch the movies, it's there. And you subliminally get the fact of what happens to you if you've got a dysfunctional government that's corrupt and doesn't work.

ROSE: As soon as you say this, there's also the cover of Time magazine. And there's George -- there is -- Warren Buffett, talking about why he believes in America, why anybody who writes off America is making a serious mistake, because of some essential qualities that Americans have.

LUCAS: Yeah. Well, a lot of it also, not to be too controversial here --

LUCAS: -- on your show, because I like you. But you know, most of the fault lies with the media. And I know everybody uses the media as a scapegoat. But the things the media focus on. The sensationalism, the kind of simple answers, the -- you know, not really telling the truth, is what creates a society where everybody gets really polarized, where they're afraid. People are afraid.

LUCAS: Yeah, but my part of the media is such a small --

ROSE: No, you -- George Lucas has a powerful voice (LAUGH), and you know that.

ROSE: You can enter the public conversation.

LUCAS: Well, I can-- I can make something that entertains people and makes them take. All I can do is try to make them think about things --

LUCAS: -- and to give them the values that we supposedly stand for, which is to cooperate, to love each other, to take care of each other.

LUCAS: Well, they're two different things. Movie-making is soaring, because we're developed digital technology. The equipment is smaller. It's cheaper. And it's now becoming democratized, so anybody can make a movie. And this is what's happening. It's like writing.

LUCAS: And that's good, because now, everybody can have a voice. It used to be that only the rich could make movies. It was very -- when I went in, there was no chance I would ever get to make movies.

ROSE: And they call the rich studios.

LUCAS: Yeah, the studios, the corporations controlled everything. And they still control quite a bit. But that is breaking away, because now you can make films much less expensive and we have digital release patterns through the Internet and things like that. So that whole part of it is changing in terms of the filmmaker. From my point of view, it's fantastic, 'cause that -- I mean, obviously, it's gonna be a wobbly period here for ten, 20 years.

But it's gonna completely revolutionize that part of -- the entertainment business. What that means to the studios is a whole other issue, because they're now caught in a transitional period that they don't really know what to do with. They don't know how to adapt. They are corporations where there's layers and layers and layers of executives that don't know anything about making movies.

And they have lost, which is what happens in that corporate environment, any respect for the workers that actually do the work. They don't realize how hard it is or what they do or the value of the worker. And as a result, they just think that you can go out and, in my case, anybody can direct a movie. Anybody can write a movie. Just put anybody in there. It doesn't make any difference.

ROSE: But not everybody's George Lucas.

LUCAS: Well, it's not. And the thing of it is is that, if you have well-trained people that have gone to school, have learned and are intelligent -- and -- and you know -- but in order to do that and hire those people, you have to know what you're hiring and why you're hiring them. You have to be able to recognize the talent and the skills they have. Right now, the people that are hiring 'em don't really have a good clue about how you actually make a movie.

ROSE: Finally, two people. One, other than yourself and looking far and wide and just keeping yourself out of it, who's the best filmmaker that you have seen or know?

LUCAS: Well, it's hard to kind of say, pick out a person, because lots of directors have different -- styles and, you know, movies are like people. You know, each one has its own personality that's better than that personality. Technically and in terms of professionally, I think Steve Spielberg's way above everybody.

CHARLIE ROSE: But your insight into filmmakers is a fascinating story. The second person is Steve Jobs. Steve Jobs bought Pixar from George Lucas. George Lucas sold it for less than, what, 10 million?

ROSE: It is now worth six, seven billion? What were you thinking about?

LUCAS: Oh, I wasn't thinking about the money. You know, I'd already turned down the chairmanship of Disney for several billion dollars. And I said, "I don't want to run a public company." And with Pixar, I developed -- it was called the Lucasfilm -- computer division, is what I started. And it was doing a lot of equipment, was doing a lot of things. They were there to develop a lot of -- digital technology that I needed for ILM.

And we kind of -- talked Steve Jobs into buying the company as a software company. But I said, "You know, guys, you got a real chance of convincing him that digital animation is a great thing." And I said, "I'll stay on as the godfather/adviser. I'm not gonna go on the board or anything, but -- "

So I, you know, was with them the whole thing. It wasn't like I was really rooting for the guys. I wanted them to get to make their digital movie. You know, one, because I'm a fan of digital. But also because they were friends of mine and I wanted to see 'em do it. But I didn't want to put the extra hundred million in.

But in order for Steve to make that company work, he had to put $100 million. He then had to go and make a deal with Disney. And it cost another $100 million. And I just -- look, I've got too many other things to worry about. And so, I'm very happy for him. I mean, I don't -- you know, what do I need another --

ROSE: What I need is more time and another time to talk to you more about stories (LAUGH). George Lucas, thank you very much.