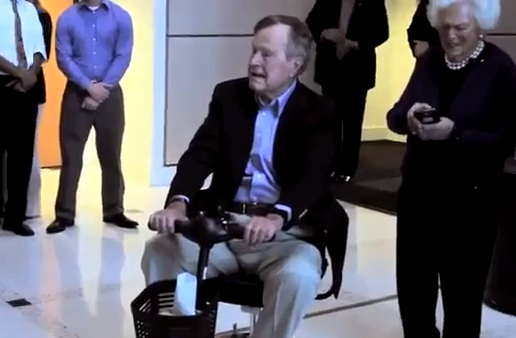 Former President George H.W. Bush got an off-syllabus lesson during a recent visit to the Texas A&M school named for him.

Finishing up what he thought was an orthodox photo op March 1 at the Bush School of Government and Public Service at the College Station, Texas, university, the 88-year-old Bush - joined by his wife, former first lady Barbara Bush, and his granddaughter, Bush 43's daughter Jenna Bush Hager - was besieged by several dozen students spontaneously bursting into a choreographed rendition of Brooks & Dunn's "Boot Scootin' Boogie."

"That's a flash mob, grandpa," Bush Hager could be seen explaining to a visibly bewildered Bush, whose mouth hung agape.

Organized by Flash Mob America, the three-minute performance was a classic nod to country: A spirited "yeehaw!" kicked off the ordeal, followed by knee-slapping and mime-lassoing. Students and the dean rewrote the lyrics for the chorus to say, "the Bushwhacker Boogie," a shout-out to the school body's nickname.

The idea to honor the 41st president with a flash mob was a request from Bush's team, according to Casi Buch, a Bush School student who last fall was an academic liaison for the international affairs program and took the lead in coordinating the effort.

"President Bush visits the school at least four times a year," Buch told CBS News. "He'd never seen a flash mob before, so his administration thought it would be a unique way to honor the president."

With the goal to make the dance exclusively students of the Bush School, an email went out to the student population two weeks before the big show asking for participants. Three rehearsals - and a week of work with a Nashville country music artist to re-record the tailored lyrics - later, the mob was ready to dance.

Afterward, Buch said, Bush met with the performers, as well as alumni and faculty in attendance.

"He said he loved it," she said. "He loved the lyrics. He wanted an encore. One of the Flash Mob America cameras was just on him the whole time, and it was so great to watch his reaction. He kept moving his scooter closer and closer."

Bush was on campus again last Thursday for lunch with his longtime friend, former Canadian Prime Minister Brian Mulroney. His office released a photo of the sit-down - the first since being released in January from a two-month stay at a Houston hospital, where he underwent treatment for a bronchial chough and other health issues.