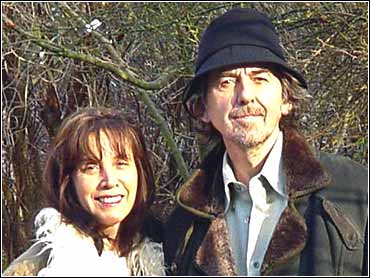 Harrison had surgery at the Mayo Clinic in Rochester, Minn. to remove a cancerous growth from one of his lungs, the news agency said. It did not say when the surgery occurred but said that Harrison is now relaxing in Tuscany, Italy.

A statement from Harrison's lawyers said the operation was completely successful and that the singer was making an excellent recovery.

In 1999, Harrison suffered a punctured lung when he was stabbed by a man who broke into his home in Henley-on-Thames, west of London. A 34-year-old man, Michael Abram, was acquitted by reason of insanity and confined to a mental hospital.

The lawyers' statement said, "George Harrison recently underwent an operation on one of his lungs at the Mayo Clinic in the U.S."

"The operation was successful and George has made an excellent recovery. He is in the best of spirits and on top form — the most relaxed and free since the attack on him in 1999. He is now enjoying a holiday in Tuscany."

Referring to the star's re-released album, the statement continued: "Although All Things Must Pass Away, George has no plans right now and is still Living In The Material World, and wishes everyone all the very best, God Bless and not to worry."

Harrison was treated for throat cancer in the late 1990s after he found a lump on his neck in 1997.

He had surgery then, followed by two courses of radiation therapy at the Royal Marsden Hospital, Britain's leading cancer treatment centre.

"I got it purely from smoking," he later said. "I gave up cigarettes many years ago, but had started again for a while and then stopped in 1997.

"Luckily for me they found that this nodule was more of a warning than anything else. There are many different types of cancerous cells and this was a very basic type," he said.

Speaking earlier this year, the intensely private Harrison said: "I had a little throat cancer. I had a piece of my lung removed in 1997. And then I was almost murdered.

"But I seem to feel stronger. I don't smoke any more. I'm a little more short of breath than I used to be, so I don't see myself on stage lasting a full 14 rounds."