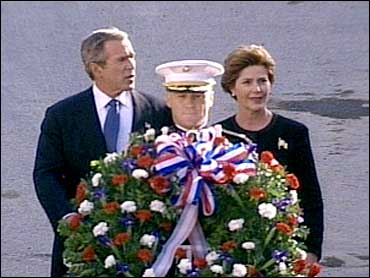 Now about to celebrate their 25th wedding anniversary, America's first couple has survived numerous challenges in both private and public life. Author Christopher Andersen explores the secrets to the Bush's success in his new book "George And Laura: Portrait Of An American Marriage."

Andersen has made a name for himself by writing about some of the most famous people of his time. Past subjects have included JFK, Jr., Princess Diana, Jack Kennedy and Jackie Kennedy Onassis and Bill and Hillary Clinton. Don't miss Andersen's interview on Wednesday's The Early Show.

Here is an excerpt from Chapter One:
September 11, 2001
A Tuesday

He rolled out of bed just before 6 A.M. at Sarasota's Colony tennis resort, pulled on shorts and an old T-shirt, then laced up his favorite pair of frayed-at-the-edges, broken-in-to-perfection running shoes. Thirty minutes later, in the half-light of dawn, the President of the United States was pounding around the palm-lined perimeter of one of Longboat Key's most exclusive golf courses, trailed by puffing Secret Service agents.

Richard Keil, White House correspondent for Bloomberg News and a former All-American distance runner, chatted with the President while they ran. "He was clipping along, and talking very comfortably," Keil recalled. "If you're not in real good shape and running that fast, you can't carry on a conversation." Running, George W. Bush explained, was his way to "cope with the stress of this job."

This morning, the President would cover just four and a half miles - two laps around the course in just over thirty-two minutes. Then it was back to his hotel suite and a quick shower before changing into the gray suit, blue shirt, and burgundy tie that had been spread out on the bed for him by an aide. Before he left, the President was given his daily intelligence briefing. The heightened threat of terrorism was mentioned this morning, as it had been nearly every morning since George W. Bush took office.

Nine hundred miles to the north, Laura Bush also started the day early. In her husband's absence, the job of taking Spot the English springer spaniel and their frisky black Scottish terrier Barney for their morning walk had fallen to the First Lady. Afterward, Laura returned to the second-floor family quarters for a quick breakfast with her in-laws. George H. W. Bush and his wife Barbara had spent the night at the White House and were about to board a private jet bound for a speaking engagement in Minnesota.

Laura had always had an easy, comfortable relationship with the ex-president and his first lady, but now they rightly sensed their daughter-in-law was preoccupied. This morning, the former schoolteacher was going to appear before Senator Edward Kennedy's Senate Committee on Health, Education, Labor, and Pensions to plead for more federal funding of early childhood education. She took even greater care than usual in picking out just the right wardrobe for the occasion: tailored red suit, a three-strand pearl necklace, matching pearl earrings.

Laura kissed her in-laws good-bye, checked her purse for the essentials ("lipstick, hairbrush, Altoids"), then headed for the White House limousine waiting to take her to Capitol Hill. It was, she said to no one in particular as she stepped out into the brilliant September sunshine, "a beautiful day, just beautiful." But as she walked the few steps toward the car, a member of her Secret Service detail took her aside to tell her he was getting some disturbing news over his earpiece. Something terrible had just happened in New York ...

The presidential motorcade was making the twenty-minute trip from the Colony to Emma E. Booker Elementary School when Press Secretary Ari Fleischer's pager went off. There were early reports that a plane had crashed into one of the Twin Towers of New York's World Trade Center just minutes before, at 8:48 A.M. President Bush had emerged from his car and was shaking hands with local officials standing outside the school when Chief of Staff Andrew Card sidled up to him with the news.

A terrible accident, Bush thought to himself as he walked into the gray-carpeted second grade classroom and, smiling broadly, took a seat to the immediate left of the teacher. Scrawled on the blackboard behind him was the slogan "Reading Makes a Country Great!" Less than twenty-four hours before, the President had been cheered at Jacksonville's Justina Elementary School as he declared "war on illiteracy." Sarasota was the second stop on a whirlwind tour of the Southeast to promote his administration's "Putting Reading First" initiative, and to muster support for an education bill that had stalled in Congress.

The eighteen students seated in two rows before him had just begun to take turns reading aloud a story about a goat when Card reappeared. He walked to the head of the classroom, leaned down, and whispered in the President's right ear. "A second plane has just hit the World Trade Center," he said. "America is under attack."

The President, sitting with his legs crossed and his hands folded in his lap, was intensely aware of the television cameras that were recording his every expression. "I have nobody to talk to," he thought to himself as he tried to absorb it all in an instant. "My God, I'm Commander-in-Chief and the country has just come under attack!"

There was no way he could conceal his feelings of shock and dismay at the horrible news. There was a fleeting look of panic in the President's eyes as Card stepped back. "It was a surreal moment," Card later said. "It was immediately obvious that it was neither an accident nor a coincidence."

But without all the facts at hand, George Bush had no intention of upsetting the schoolchildren who had come to read for him. The rest of the children's story about the goat did not register with him at all, but the President, raising his eyebrows and nodding, interrupted the second graders to praise them. "Really good readers, whew!" Bush told the class. "This must be sixth grade."

The foregoing is excerpted from "George and Laura" by Christopher Andersen. All rights reserved. No part of this book may be used or reproduced without written permission from HarperCollins Publishers, 10 East 53rd Street, New York, NY 10022
: