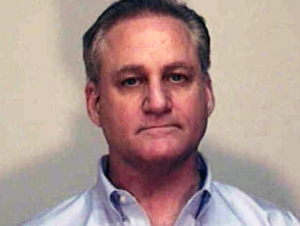 Police received a 911 call at around 9:47p.m. on March 26 regarding 56-year-old Geoffrey Weglarz, a customer who reportedly became angry outside the drive-thru window of a McDonald's in Fairfield.

After Weglarz drove off with his food, he returned moments later and banged on the front door of the restaurant -- which was locked --police said, according to the station.

"He went back to the drive-thru and was yelling and swearing at the manager who clearly told this individual not to yell and swear at her because she was pregnant," Police Sgt. Suzanna Lussier told 1010 WINS. "And at that time he took the bag of food and threw it directly at her hitting her in the chest."

Weglarz continued to yell and bang on the window until the manager told employees to call police, the station says.

Weglarz reportedly fled the scene before police arrived, but employees were able to write down Weglarz's license plate number and police went to his Fairfield home and arrested him.

According to authorities, Weglarz had a loaded Glock pistol in his waistband, but he was able to produce a valid Connecticut pistol permit.

"He was holding it on his person even when officers arrived, so we can likely assume that he had it on him while he was in the drive-thru and arguing and swearing with these employees at McDonald's as well," Lussier said.

Weglarz was charged with breach of peace and released. He is due in court April 9.