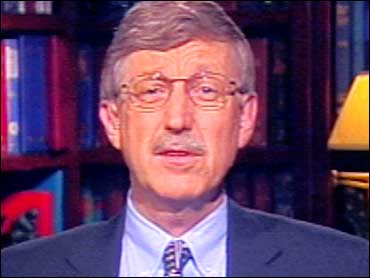 Fifty years after the discovery of the structure of DNA, scientists have completed the mapping of the human genome, which is the actual blueprint for life. The feat, once thought impossible, is widely viewed as one of the most significant scientific breakthroughs of our time.

The federally funded project was completed ahead of schedule and under budget, says Dr. Francis Collins, head of the National Human Genome Research Institute, the lead National Institutes of Health agency in the project.

Officially, the Genome Project was funded by Congress and set up by the National Institutes of Health in Bethesda, Md., in 1990. But individual researchers and companies had been working on sequencing the genome long before that. The target date for completion of sequencing was 2005. So with Monday's announcement, the project has finished two years early.

"Basically what we have done now is to read our own instruction book, " says Collins. "Our own instructions are made up of 3 billion letters of the DNA code. For all of human history, we've sort of managed to get by without knowing what was in that book. And now, as of yesterday, we have it. It's in front of us. It's done," Dr. Collins tells Early Show co-anchor Rene Syler.

And our instruction book contains a lot of information. "If you imagine printing it out and piling the pages on top of each other, it would be as high as the Washington Monument, believe it or not," he says. "And you have that information inside each cell of your body. And it is, of course, the blueprint that determines how cells work. And it also will tell us how sometimes they don't."

This will transform the practice of medicine and for a physician, Dr. Collins says, that is very exciting.

"By giving us that fundamental information about how we are put together that will enable us to do better prevention, and to develop better treatments. It's going to change everything," he says.

Dr. Collins admits there is the danger that such information could be used against people. An employer or an insurance company that finds out that a person carries a gene for a specific illness could take away the job or insurance.

"Effective federal legislation is under consideration right now in the United States Senate, and I think we need to see that passed and put into force, " he says. "And then people will not have to fear that finding this very valuable information about themselves might be dangerous. It doesn't have to be that way. We just need to take the right policy steps," Collins says.

In mapping out the human genome, Collins says, there were a lot of things that surprised him and his team.