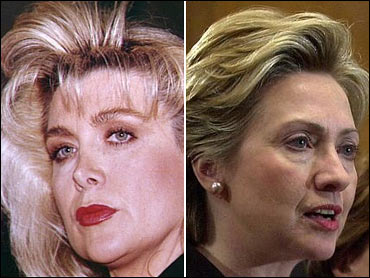 The one-time other woman in Hillary Rodham Clinton's life says she's considering casting her vote for the former first lady.

"I can't help but want to support my own gender, and she's as experienced as any of the others - except maybe Joe Biden," Gennifer Flowers said in a recent telephone interview from her home in Las Vegas.

Flowers said she is still undecided, supports abortion rights and has long wanted to see a woman in the White House.

"I would love to see a woman president, I just didn't think it would be her," Flowers said.

In the 1992 presidential race, the former television reporter claimed to have had a 12-year affair with then-candidate and Arkansas Gov. Bill Clinton. Clinton initially denied the allegation, but later, during his deposition in the Paula Jones sexual harassment case, acknowledged a single sexual encounter with Flowers.

Today the media frenzy, the book tour and the Penthouse shoot is behind her. The defamation suit she once filed against Hillary Clinton was dismissed. The 57-year-old lounge singer says she plans to stay far away from presidential politics.

"I don't have any interest whatsoever in getting back out there and bashing Hillary Clinton," Flowers said.

That's not to say she isn't watching the race closely. Democratic Sen. Joe Biden of Delaware, she said, is "smart, sexy and experienced." She liked Clinton's response to a question about immigration at a recent debate in Las Vegas ("I like the way she was so definite about it, the others are trying to play to the middle.")

Mitt Romney is also on the short list, though in general "the GOP has yet to start impressing me," said Flowers, a registered nonpartisan who has recently voted Republican.

Flowers moved to Las Vegas about a year ago, after years of singing at a cabaret club in New Orleans. Hurricane Katrina wrecked her home and her marriage, she said. Sin City offered her a chance to perform in Bottom's Up, a variety show at a casino in downtown Las Vegas.

She's now looking for other performing opportunities, involved in a plastic surgery reality series and has begun writing an advice column for a community Web site.

Flowers says she hopes to use the column to impart wisdom on how to overcome challenges.

And she has no advice for Clinton.

"She wouldn't take any advice from me anyway. Looks like she's doing just fine on her own," Flowers said.