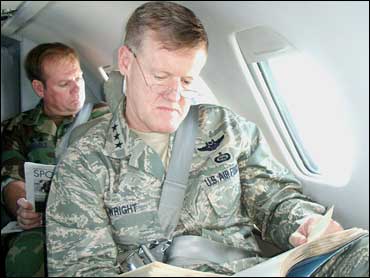 While the U.S. has been tied up in Iraq, China is modernizing its military and its air defenses are now nearly impenetrable to all but the newest of American fighters, the senior U.S. military official in Japan said.

Lt. Gen. Bruce Wright, commander of the roughly 50,000 U.S. forces in Japan, Washington's biggest ally in Asia, said in an interview with The Associated Press this week that the Iraq war is reducing the availability of U.S. troops and equipment to meet other contingencies.

It's also eating funds that could go toward replacing or upgrading planes that are being pushed to their operational limits, he said.

China, meanwhile, is rapidly filling the skies with newer, Russian-made Sukhoi Su-27 "Flankers" and Su-30s, along with the domestically built J-10, a state-of-the-art fighter that Beijing just rolled out in January.

China has also improved its ballistic missile defenses and its ability to take the fight into space - as it proved in January by shooting down an old weather satellite at an orbital height similar to that used by the U.S. military.

Wright stressed he is "positive" about the current efforts to increase diplomatic and political engagement with Beijing. But he said the Chinese military buildup is disconcerting.

The Pentagon estimates China's actual defense spending may be much higher, because the official budget does not include money for high-priced weapons systems and some other items.

In the U.S., the Senate is wrapping up debate on a $672 billion defense policy bill that would authorize more than a half trillion dollars in annual defense spending and $150 billion for the wars in Iraq and Afghanistan.

"Are we in trouble? It depends on the scenario," Wright said Thursday. "But you have to be concerned about the small number of our forces and the age of our forces."

Wright noted the Air Force's fleet is older than ever before.

The average age of the F-15 fighters, for example, is about 24 years, while that of the KC-135 Stratotanker, a mid-air refueling plane that is a key element in the Air Force's ability to conduct long-range missions, is 46 years.

Wright, who was at this air base on Japan's southern island of Okinawa to meet with local commanding officers, said the improvement in Chinese air defenses has made China's airspace "difficult if not impossible" to penetrate with the kind of U.S. fighters - F-15s and F-16s - now deployed in Japan.

Doing so would require the F-22 or the Joint Strike Fighter, which both have stealth capabilities. The Air Force sent a dozen F-22s to Japan earlier this year, but only for a temporary deployment. It has no plans to bring more here permanently.

The Joint Strike Fighter, or F-35, is not yet combat-ready.

"Our planes are much older than the planes they would be matched against," Wright said. "For the first time in history, we are seeing another nation, in this case China, with newer fighters than we have. We know that they continue to invest at a level that is unprecedented. We need to be watchful of Chinese military capabilities."

He said the demands of supporting ground troops in Iraq has pushed the Air Force to draw on its fighters from virtually anywhere they can be found. Two U.S. F-16 fighter squadrons from the northern Japan base of Misawa are currently rotating in and out of Iraq.

Wright noted Beijing is also at an advantage because it is not now at war, and can thus devote more of its resources to building up new capabilities.

"China is not engaged in a tough ground war in southwest Asia so they have the freedom to maneuver to modernize forces that are not current," he said.

Air Force officials have sent up alarms recently regarding funding.

Although the Army and Marines are increasing their troop levels by 92,000, the Air Force had announced plans to cut its costs by reducing 40,000 personnel. That plan had to be scaled back, however, because of the need for support for the larger number of ground troops.

"I'm concerned for the future," he said. "We're simply not funded to maintain and do everything that everyone wants us to do."

Wright, who is also commander of the 5th Air Force, which is based just outside of Tokyo, said the crunch is being felt in the Pacific.

"It's not just boots on the ground that's fighting the war right now," he said. "There's a funding top line for the Department of Defense, and the Air Force needs more of it."