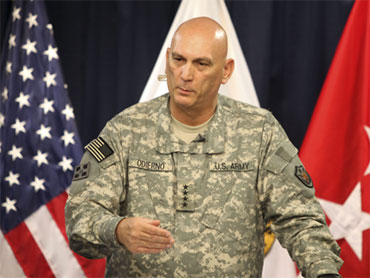 Baghdad's political troubles will not keep American troops from leaving the country as planned at the end of 2011, the military's top commander in Iraq said Wednesday.

Gen. Raymond Odierno told reporters that the Iraqi security forces are doing much of the work already and that security has improved significantly since 2006 when an "almost civil war" gripped the nation.

Odierno says U.S. forces haven't needed to conduct airstrikes in at least six months and that Americans are mostly operating as advisers to Iraqi forces. Al Qaeda fighters in Iraq have been cut off from their leadership in Pakistan, he said.

"There has been steady, deliberate progress across all lines," Odierno said. "There's clearly more to do, but a new baseline has been established."

Iraq's political parties have been unable to form a new government since March, when elections failed to produce a clear-cut winner.

Odierno told reporters Wednesday that he would be concerned if the political issue is not resolved by October.

"They will get there. Whether it happens next week or two months from now, I don't know yet," he said.

Odierno said it is likely that 50,000 troops will stay in Iraq through mid-2011, when the U.S. begins drawing down to meet Obama's requirement that all troops are gone by the end of that year.

Odierno said a major concern in the months to come will be protecting the Sons of Iraq, the Sunni tribesmen credited with turning the war around after they revolted against al Qaeda.

Odierno promised that the U.S., working through the Iraqi government, "will ensure that the Sons of Iraq program stays vibrant inside of Iraq."

So far, the U.S. has turned over some 500 bases to the Iraqis. The U.S. equipment used during the war has either been sent back to the United States or is en route to Afghanistan, he said.