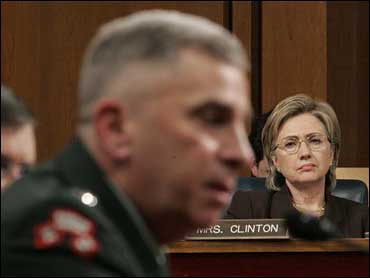 The top U.S. commander in the Middle East on Wednesday pitted his resistance to troop strength changes in Iraq against some of the Senate's most powerful lawmakers.

CBS News national security correspondent David Martin reports that after arguing against either a substantial buildup or cutback in U.S. troops, Abizaid made a stunning admission: The U.S. military does not have enough troops for a big buildup even if he wanted one.

"We can put in 20,000 more Americans tomorrow and achieve a temporary effect," said Abizaid. "But when you look at the overall American force pool that's available out there, the ability to sustain that commitment is simply not something that we have right now with the size of the Army and the Marine Corps."

In Abizaid's words, the "prudent course ahead is to keep the troop levels about where they are," a sentiment that puts him at odds with resurgent Democrats pressing President Bush to start pulling out of the violence-torn country.

Abizaid spoke as the committee began re-examining U.S. policy in the wake of last week's elections, which gave Democrats control of Congress starting next year and was widely seen as a repudiation of the administration's war policies.

McCain challenged Abizaid on his analysis of the situation and complained that he was advocating no major changes in U.S. policy. McCain, a possible 2008 presidential candidate, has called for adding thousands more U.S. combat troops in Iraq to help fight the insurgency and halt sectarian violence in Baghdad.

"I'm of course disappointed that basically you're advocating the status quo here today, which I think the American people in the last election said that is not an acceptable condition," McCain said.

In response, Abizaid said he was not arguing for the status quo. He said the key change that is needed now is to place more U.S. troops inside the Iraqi Army and police units to train and advise these forces in planning and executing missions.

Another possible 2008 presidential candidate, Sen. Hillary Clinton, D-N.Y., said she saw no evidence that conditions inside Iraq were improving.

"Hope is not a strategy," she said.

Citing administration claims of progress, she said, "The brutal fact is, it is not happening."

But even some Republicans on the Senate panel voiced a measure of frustration at the long and costly war in Iraq.

Sen. John Warner, R-Va., the committee chairman, noted that the conflict has lasted as long as World War II, with the Iraqi government still unable to stand on its own and assert authority over security forces.

"How do you explain that in simple terms to the American people?" he asked in his opening statement.

Democrats have been coalescing around a call for beginning a U.S. withdrawal in coming months. In arguing against a timetable for troop withdrawals, Abizaid told the committee that he and other commanders need flexibility in managing U.S. forces and determining how and when to pass on responsibility to Iraqi forces.

Asked directly what effect he foresaw on sectarian violence if Congress legislated a phased U.S. withdrawal starting in four to six months, Abizaid replied, "I believe it would increase."

"It seems to me that the prudent course ahead is to keep the troop levels about where they are," Abizaid said, while placing larger teams of U.S. military advisers inside Iraqi army and police units. He said that increased emphasis on advising Iraqi units might be accomplished without significantly increasing the total U.S. force in the country.

With voters expressing overwhelming opposition to the war, Mr. Bush the day after the election expressed a willingness to consider fresh approaches to Iraq policy and announced the resignation of Defense Secretary Donald H. Rumsfeld, who had become a symbol of the unpopular war.

Abizaid said he believes U.S. troop levels, now at about 141,000, should stay steady but may have to rise temporarily to train and advise Iraqi military units. No reductions are advisable until Iraqi security forces become more capable of dealing with the insurgency, securing Baghdad and dealing with the Shiite militia problem, he said.

"Our troop posture needs to stay where it is," for the time being, he said.

"He seemed optimistic and pointed out that things, he thought, had improved somewhat since August — which saw some of the most intense period of sectarian violence — though he's quick to add we haven't exactly turned a corner in Iraq," McCausland said.

Clinton asked about the wisdom of partitioning Iraq along sectarian lines, with autonomous regions for the Kurds, Sunnis and Shiites.

"Partition in Iraq could only be achieved at an expense of human suffering and bloodshed and forced dislocation that would be both profound and wholly unacceptable, I believe, to the American people," said David Satterfield, the senior State Department adviser on Iraq. "It is wholly unacceptable to this administration."

Pressed by Sen. Jack Reed, D-R.I., on how much time the U.S. and Iraqi government have to reduce the violence in Baghdad before it spirals beyond control, Abizaid said, "Four to six months."

Developing a "capable, independent" Iraqi government and armed forces "will set the conditions for withdrawal" of U.S. forces, Abizaid said. He offered no timetable for reaching that point. But he said earlier, "I remain optimistic we can stabilize Iraq."

He also acknowledged under questioning that Anbar province, where the Sunni insurgency is strongest, "is not under control." Nonetheless, he said, the main U.S. military effort needs to be in Baghdad rather than Anbar.

Reflecting the division of opinion on how to proceed in Iraq, the next chairman of the committee said the administration must tell Iraq that U.S. troops will begin withdrawing in four to six months in order to force them to take responsibility for their own future.

"We cannot save the Iraqis from themselves. The only way for Iraqi leaders to squarely face that reality is for President Bush to tell them that the United States will begin a phased redeployment of our forces within four to six months," said Sen. Carl Levin, D-Mich.

An AP-Ipsos poll released Tuesday found that people consider Iraq the top priority for Congress over the next two years. But a majority of people, 57 percent, say the Democrats in Congress have no plan for Iraq — highlighting the sense of frustration over the war that was started more than 3½ years ago.

Asked about his testimony in August that Iraq could fall into civil war and that the sectarian violence was as bad as he had ever seen it, Abizaid said that more recently the situation has improved, while still troubling. He visited Baghdad in recent days.

"It's certainly not as bad as the situation appeared back in August," Abizaid said, adding that he saw growing confidence among Iraqis in their government. "It's still at unacceptably high levels," he said of the sect-on-sect violence "I wouldn't say that we have turned the corner in this regard, but it's not nearly as bad as it was in August."

Wednesday's hearing was the first on Iraq policy since the Nov. 7 elections, when voters handed Democrats control of Congress in part because of their frustration over the lack of progress in Iraq. Just over a third of the public approves of Mr. Bush's handling of the war, according to AP-Ipsos polling last month. About six in 10 think the U.S. military action in Iraq was a mistake.

Satterfield told the committee that the situation must not reach the point where ordinary Iraqis believe they are better protected by unauthorized militias than by their own government.

"Hope for a united Iraqi will crumble," if that happens, he said. "Such an outcome in Iraq is unacceptable. It would undermine U.S. national interests in Iraq and in the broader region. And it would lead to a humanitarian disaster for the Iraqi people."