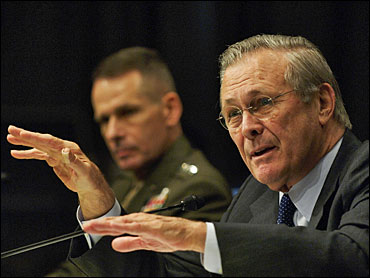 The National Guard and Reserves will play a much smaller role next year in Iraq and Afghanistan, dropping to less than one-fifth of overall U.S. forces there, the nation's top military officer told senators Tuesday.

In response to repeated questions about the strain on reserve forces on the front lines, Gen. Peter Pace, chairman of the Joint Chiefs of Staff, told the Senate Armed Services Committee that Guard and Reserves will make up just 19 percent of the forces deployed in Iraq and Afghanistan over the next year.

Currently they make up about 30 percent of U.S. forces in those countries, Pace said. That means the planned reduction would lower the reserves' proportion of total American forces in Iraq and Afghanistan by about one third.

The planned reduction in reserves comes as Bush administration officials have been saying they hope to reduce the numbers of U.S. troops in Iraq this year, assuming the Iraqi government and its forces can take a wider role in the war and keeping order.

The Bush administration has been under pressure to bring more American troops home. A study commissioned by the Pentagon said last month that the wear and tear of the U.S. deployment in Iraq was beginning to wear down the Army and questioned how much longer it could continue operating there at full effectiveness.

Gen. Peter Schoomaker, the top Army officer, told the senators that heavy use of the Guard and Reserve has given the Army time to reorganize and prepare for its regular troops to take on a broader role beginning in March.

Defense Secretary Donald H. Rumsfeld, meanwhile, told the committee that corruption in Iraq is threatening efforts to create a stable government there, something needed before large numbers of U.S. troops will be pulled out, reports .

"It's true that violence, corruption and criminality continue to pose challenges in Iraq" and are "so corrosive of democracy," he said.

"It's critically important that it be attacked and that the new leadership in that country be measured against their commitment to attack corruption," he added.

Rumsfeld provided no specific examples. But there have been recent allegations that some revenue from Iraq's slowly rebuilding oil industry have been siphoned to help finance the insurgency there.

Rumsfeld added that "our awareness of corruption is increasing," because coalition officials are doing more to investigate those problems within the government.

Committee chairman John Warner, R-Va., said the next six months would be critical in Iraq and will be key to the eventual withdrawal of U.S. troops and coalition forces. He said increasing problems with corruption in Iraq make it more difficult for coalition forces.

Rumsfeld faced criticism from one committee member who said the $439.3 billion defense budget for 2007 that President Bush proposed on Monday is not responsible because it doesn't reflect the billions of dollars that will be spent on Iraq and Afghanistan.

Sen. Carl Levin, D-Mich., also questioned whether the U.S. will be able to sustain necessary troop levels in Iraq, where difficult conditions are wearing down both people and equipment. A report conducted for the Pentagon drew a similar conclusion last month.

Mr. Bush proposed an initial payment of $50 billion for those wars next year, compared with $120 billion the administration says will be needed this year.

Rumsfeld also said the U.S. military must continue to change in order to defend the nation against enemy terrorists who could acquire a nuclear weapon or launch a chemical attack against a major U.S. city, Rumsfeld told the Senate Armed Services Committee.

"No nation, no matter how powerful, has the resources or capability to defend everywhere, at every moment of the day or night, against every conceivable type of attack," said Rumsfeld.

The new plan includes White House estimates that the country's two overseas wars and its homeland defense could cost as much as $10 billion a month this year — nearly 50 percent more than last year.

During fiscal year 2005, which ended last Sept. 30, the Defense Department spent about $6.8 billion a month on operations in Iraq and Afghanistan and the replacement of equipment damaged or destroyed there.