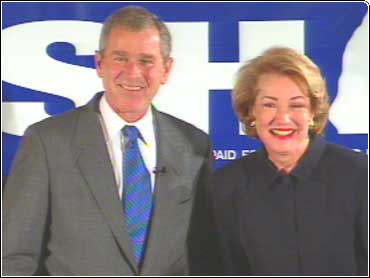 Texas Gov. George W. Bush gladly accepted former rival Elizabeth Dole's endorsement for the 2000 Republican presidential nomination Tuesday, saying she would be a "general in his army" after she served as a "lieutenant" for Ronald Reagan during his presidency.

"I am really pleased such an articulate and capable woman has endorsed my campaign," Bush said, addressing a crowd in New Hampshire, site of the nation's first primary on Feb. 1.

Dole, 63, a two-time cabinet secretary and former president of the American Red Cross, will also travel to Iowa, which holds its caucuses in January, for several campaign appearances with Bush there.

The sign on Bush's podium read, "Welcome aboard, Mrs. Dole." Dole dropped out of the race in October, saying she lacked the money to compete against Bush and other cash-rich Republican rivals.

At the time that she left the campaign trail, Dole pointedly declined to say whether she would consider being a vice presidential running mate for Bush or another Republican contender. But she also did not rule out the possibility.

Calling Dole "the most viable woman candidate for president ever," Bush said Dole shares his conservative values and agrees that the two most important domestic issues facing the country are tax cuts and education.

CBS News poll: Republicans weigh in on Liz Cheney and direction of GOP
Highlighting the governor's accomplishments in Texas education reform, Dole said she was honored to return to New Hampshire to tell people why Bush should be the next president of the United States.

The younger Bush last month won the endrsement of another rival for the presidential nomination, former Tennessee Gov. Lamar Alexander.