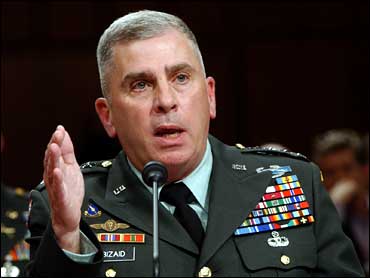 When it comes to the war in Iraq, no other military man has a job more important than Gen. John Abizaid, the four-star commander of all U.S. forces in the Middle East. He was the first person Congress turned to earlier this month for answers, after American voters demanded a change in course, frustrated by a war that seems to be going nowhere and grows more violent every day.

The general doesn't grant many interviews, but he agreed to talk to correspondent Lara Logan last week for the first time since that appearance on Capitol Hill. While Logan and Gen. Abizaid came to talk about Iraq, the 60 Minutes was struck by how much the general had to say about Iran.

Logan met Gen. Abizaid at his headquarters in Tampa, Fla., as he was preparing to leave on one of his frequent trips to the Middle East.

"Three years into this war, close to 3,000 American soldiers killed and more than 20,000 wounded. A lot of Americans are wondering how it is that we got to this point. I mean, they still remember the president saying, 'Mission Accomplished,'" Logan remarks.

"Nobody's more mindful of the sacrifices of our troops than those of us that command them," Abizaid says. "And I know that the losses have affected many, many lives. But the enemy that we fight is a tough enemy. The enemy can't be walked away from easily. We have to stabilize Iraq and the broader regional dynamic in order to make the region less conducive to extremism because if we don't, the extremist values will become mainstream and we will have a much worse security situation develop in the future."

According to a U.S. intelligence report on Iraq declassified in September, that's already beginning to happen. It found the war in Iraq is "shaping a new generation of terrorist leaders" and becoming a "cause celebre … for jihadists."

"Exactly on that point, a national intelligence estimate said it appeared that extremism was emboldened and strengthened by this war. So, how do you think we're doing on stopping those ideas taking root in the region?" Logan asks the general.

But fighting the war on terror there has made life for many Iraqis unbearable. It's something Abizaid understands: He speaks their language. His fluency in Arabic makes him a military rarity. He's the grandson of Lebanese immigrants and a highly decorated combat veteran who understands the dynamics of this volatile part of the world and the consequences of failure in Iraq.

Asked what his greatest fear for Iraq is, Abizaid says, "My greatest fear is that neighboring countries like Iran and Syria decide that they will destabilize the country more, as opposed to help it come together."

Asked what that would mean for the U.S. if that were to happen, the general says, "If Iraq destabilizes and moves to civil war, it will be a point where Shiite extremists and Sunni extremists will be emboldened and will achieve safe haven, and it will create a problem not only for us but for everybody in the region. That will only lead to more conflict, not less."

But the conflict has already reached a level of violence that many Americans find unacceptable. October was the deadliest month since the war began for Iraqis, and in almost two years for U.S. troops. Snipers are now a constant threat, and roadside bombs continue to claim American lives.

They're dying, the general says, at the hands of both Sunni extremists and Shiite militants, which he told Logan are backed by the Iranian government's special forces, the Revolutionary Guards Qods Force, who are pouring weapons and money into Iraq.

"At the same time that the government of Iran is talking about stabilizing Iraq, these Revolutionary Guard Qods Force people are supporting the Shia death squads of some of the various splinter…," Abizaid explains.

"So, aren't we already at a war with Iran through its proxies in Iraq?" Logan asks.

"No. We're not at war with Iran through its proxies. We are in a period of making it clear to the Iranians that they need to move to help stabilize Iraq and not destabilize it," Abizaid says.

"Everything I see on the ground in Iraq ... they don't care what we're making clear. They're consolidating their power and their hold on Iraq. In fact, American commanders in Baghdad say more American soldiers are being killed in Baghdad by Shiite militias backed by Iran than by Sunni insurgents today," Logan says.

"Well, that's not true," the general replies. "The majority of the casualties still come from the Sunni side."

"Even in Baghdad. But there's no doubt that Shia militias, not necessarily operating on the orders of Iran, look. I am not defending Iranian actions inside Iraq. And I say it is a mixed signal that comes from Iran," Abizaid explains. "Iran operates in very, very different levels in very different ways. But I believe that there are people within the Iranian government, especially those that are very much encumbered by this revolutionary idea of expansion and supporting the various movements inside Iraq that are splinter movements, that they would prefer to see a southern Lebanon-like solution to Iraq, where they can control the militia and have a weak central government as opposed to have a strong central government emerge. No doubt that Iran is playing a very unhelpful role in Iraq, in southern Lebanon."

"And it's very important that we contain, confront terror, deter the Iranians from doing this," Abizaid adds.

"I know that's a political issue. But would you concede that Iranians are helping to kill American soldiers in Iraq?" Logan asks.

"I think that Iranians indirectly are working not only against our presence there, but also against the Iraqi government," Abizaid says.

"Which at the end of the day means their money, their weapons are support – is helping to kill American soldiers in Iraq," Logan notes.

"At the end of the day, the Iranian government is not working to stabilize Iraq. And they need to be," he replies.

It's that kind of straight-talk that has become Abizaid's trademark. When the Bush administration refused to call Iraq a "guerilla war," Abizaid did. When administration officials refused to admit that Iraq was sliding toward civil war, Abizaid said it was.

Ten days ago he told Congress that if the violence is not quelled in the next four to six months, Iraq could spiral out of control. But there may be even less time than that: multiple car bombings Thursday in Baghdad's Shiite stronghold of Sadr City killed more than 200 people. It was the worst sectarian attack since the invasion.

"The sectarian violence is worrisome. It can be fatal to Iraq if it's not checked. The Iraqis know that better than anybody. And there's no solution to a divided Iraq. There's no good solution to a divided Iraq. It's gotta come together. It's gotta stabilize. And it's gonna require Iraqi sacrifice and courage and responsibility along with that of the United States and our allies," Abizaid says.

The U.S. strategy has been to hand over increasing responsibility for the country's security to Iraqi forces, who are largely ill-equipped, undermanned and unreliable. There's mounting evidence they're complicit in many militia kidnappings and executions and are as much a part of the problem as the solution. But Gen. Abizaid remains convinced these Iraqi forces are crucial to the solution.

"I believe that in the last three or four months, that the prime minister and his ministers, in particular the minister of defense and the new minister of interior, have showed a clear desire to move against the sectarian violence. They know that the militias have got to be taken on," he says.

"You don't think they are the militias? I mean, the Iraqi…," Logan asks.

"Not then. I think there are … militias," Abizaid says. "There are certainly problems with infiltration in the police ranks, and to a lesser extent, in the army ranks. But I believe that if everybody understands that the militias will be the death of Iraq and the army the salvation of Iraq. People will move towards the only solution, which is to get behind the army and get behind the government of national unity, move towards political compromise, achieve economic stability, and also involve the nations and the region in diplomatic activity, not to back one of these sides."

"I think the Iraqi troop levels are moving in a direction number wise. Quality wise, they are constantly improving. But again, the government must get behind its army in order to give it confidence that it can operate on the non-sectarian plain. And it's a very, very complicated problem. But it is one that can be solved," Abizaid says.

Whether that will require additional U.S. troops is the subject of intense debate. When Gen. Abizaid testified before Congress, he said more troops would be a short-term solution, increase dependence on the U.S., and strain the U.S. military even more. But when Logan talked to him, he didn't rule it out.

"I had not precluded the notion of more troops coming into Iraq," Abizaid says. "We'll do whatever we have to do to stabilize the situation. As I said in my testimony, all options are on the table."

"We hear very little about the victory in Iraq these days. We hear a lot about how to manage the defeat. And a lot of…," Logan says.

"What defeat?" the general asks.

"How we minimize…," she continues.

"You talk to our commanders in the field – they don't believe that they've been defeated. Defeat is your word, not my word. Can Iraq stabilize? Yes, Iraq could stabilize," Abizaid says.

"Is that victory now? Is that what victory will look like in Iraq, just stability, that's what we're aiming for?" Logan asks.

"Victory in Iraq is the nation at peace with its neighbors. And Iraq hasn't been at peace with its neighbors in a long time. It is a country that respects the rights of its citizens," Abizaid explains. "It's a country that can defend itself. It's a country that's not a save haven for terrorists. Exactly what form of government they choose to develop I think would be a uniquely Iraqi solution to the problem. But the fact that they will come to a solution where they've gotta take into account the rights and desires not only of ethnic groups of individual, rights and desires, is actually a revolutionary change in the Middle East."

Asked if we are, Abizaid says, "No. We're not. And our involvement in the region will prevent it."