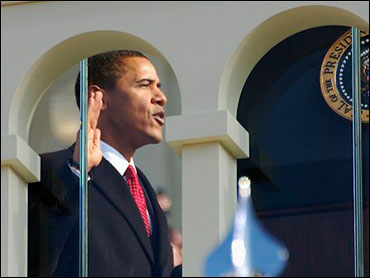 Treasury Secretary-designate Tim Geithner said Wednesday he was careless in failing to pay $34,000 in U.S. taxes earlier this decade and apologized to Congress.

He told the Senate Finance Committee he was sorry that his past transgressions were now an issue in his confirmation at a time of deepening economic crisis. He urged Congress to act quickly and forcefully to deal with the crisis. A top administration priority is to foster economic recovery and "get credit flowing again," Geithner testified.

As to his failure to pay the payroll taxes from 2001 to 2004 while he worked for the International Monetary Fund, Geithner said: "These were careless mistakes. They were avoidable mistakes."

"But they were unintentional," he said. "I should have been more careful."

Geithner told the panel that he had prepared some of the returns himself with a popular tax-preparation computer program.

Sen. Charles Grassley, the senior Republican on the panel, noted that as treasury secretary, Geithner would be in charge of the Internal Revenue Service.

He suggested the danger of "sweeping the under the rug" Geithner's tax problems in a rush to get him confirmed.

"I have paid what I owed," Geithner said under grilling from Grassley. "I apologize to the committee for putting you in the position of having to spend so much time on these issues."

Although the tax disclosures provided a bump in Geithner's confirmation process, he appeared to have wide support from both parties.

Grassley said he recognizes that many in Congress view Geithner, who worked closely with the outgoing administration on financial bailouts as head of the New York Federal Reserve Bank, is "possibly the only man for the job of healing the recession before us and a very fractured economy."

"To some, he is not only the best choice, he is the only choice," said Grassley.

Committee Chairman Max Baucus called Geithner's tax transgressions "disappointing mistakes," but said he believes they were innocent ones - and should not bar Geithner from serving in the administration's top economic position.

Geithner addressed criticism from committee members, and from other in Congress, over how the $700 billion financial bailout program enacted by Congress last October has been spent so far by the outgoing Bush administration.

Geithner also said that President Obama and he "share your belief that this program needs serious reform."

He cited "a deep uncertainty about what tomorrow holds."

"Our test is to act with the strength, speed, and care necessary to get our economy back on track, and to restore America's faith in our economic future," Geithner said.

Confirmation proceedings are also expected for Sen. Hillary Rodham Clinton as secretary of state and Eric Holder as attorney general.

On Tuesday, the Senate moved swiftly to approve six of Mr. Obama's nominees, just hours after he was sworn in. But Texas Republican John Cornyn blocked the confirmation vote of Clinton over questions concerning the global fundraising of her husband, former President Bill Clinton.

Cornyn said he wanted "a full and open debate and an up-or-down vote on Sen. Clinton's nomination." He said important questions remain unanswered concerning Clinton's foundation "and its acceptance of donations from foreign entities. Transparency transcends partisan politics and the American people deserve to know more."

Cornyn's spokesman Kevin McLaughlin said the senator is not trying to block her confirmation, but is seeking more debate on the donation issue.

Senate leaders agreed to have a roll call vote on Clinton on Wednesday after three hours of debate. Jim Manley, spokesman for Senate Majority Leader Harry Reid, predicted that "she will receive overwhelming bipartisan support at that time."

The Judiciary Committee is scheduled to consider the nomination of Eric Holder as Mr. Obama's attorney general. And the Commerce Committee will hold a confirmation hearing for Ray LaHood as transportation secretary.

Among those officials confirmed Tuesday were Steven Chu to be energy secretary, Arne Duncan at education, Janet Napolitano for homeland security, Eric Shinseki to head veterans affairs, Ken Salazar for interior and Tom Vilsack to lead the department of agriculture.

The Senate also approved Peter Orszag, recently the director of the Congressional Budget Office, to head the White House's Office of Management and Budget.

Mr. Obama signed nominating papers for his Cabinet choices about an hour after he took the oath.