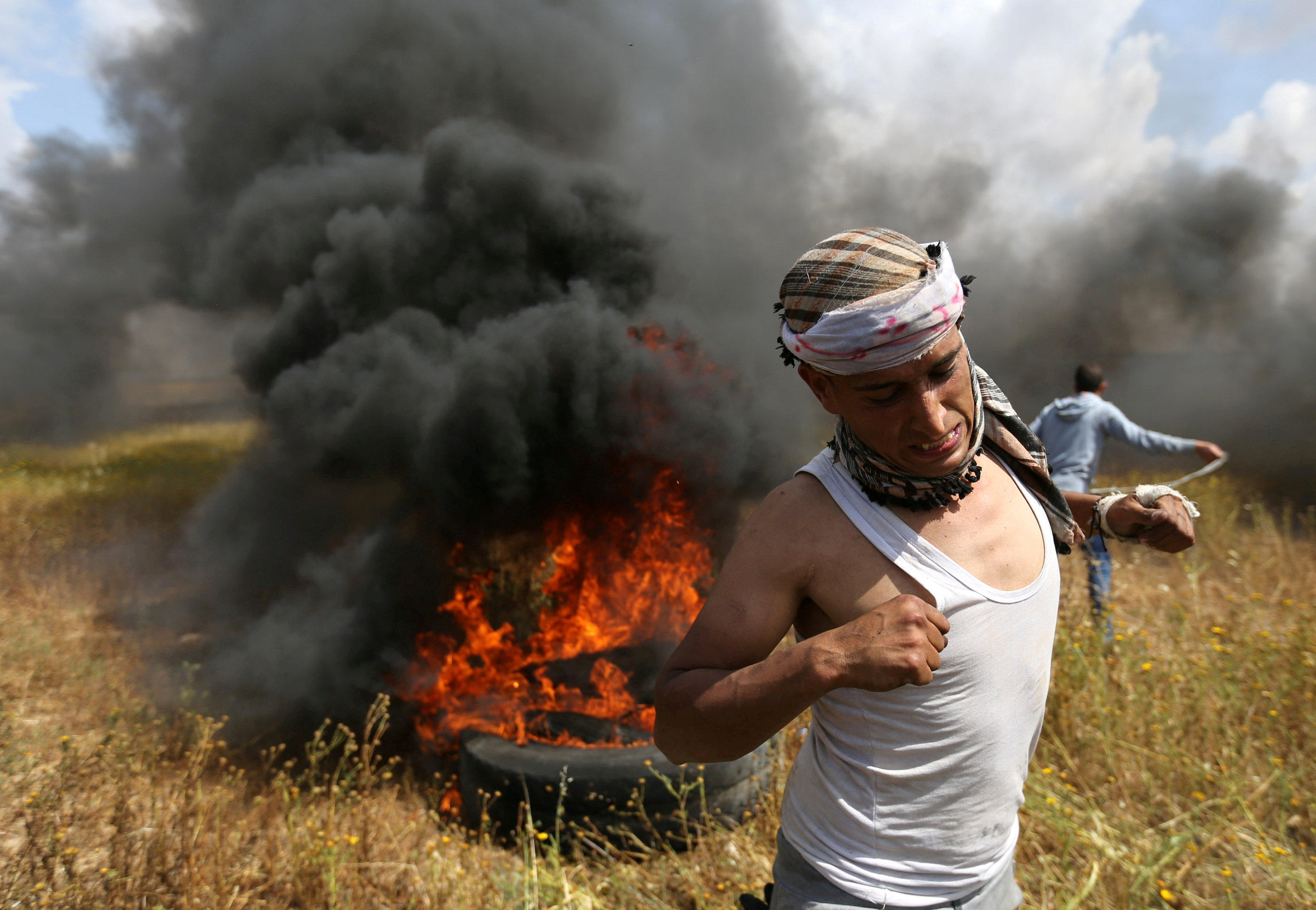 GAZA CITY, Gaza Strip -- Thousands of Palestinians marched to Gaza's border with Israel on Friday in the largest such demonstration in recent memory, and 14 were killed by Israeli fire on the first day of what Hamas organizers said will be six weeks of daily protests against a stifling border blockade. It was the bloodiest day in Gaza since the 2014 cross-border war between Israel and Hamas.

Fourteen of the marchers were killed and more than 750 wounded by Israeli fire in clashes along the border fence, the Palestinian Health Ministry said.

The Israeli military said thousands of Palestinians threw stones and rolled burning tires toward troops deployed on the other side of the border fence. It accused militants of trying to carry out attacks under the cover of mass protests, saying that in one incident, Palestinian gunmen fired toward soldiers.

The large turnout of the flag-waving marchers in the dangerous border zone was a testament to Hamas' organizing skills, but it also signaled desperation among Gaza residents after a decade-old border closure. Life in the coastal strip has deteriorated further in recent months, with rising unemployment, grinding poverty and daily blackouts that last for hours.

Asmaa al-Katari said she participated in the march despite the risks and would join upcoming protests because "life is difficult here in Gaza and we have nothing to lose."

The history student said she is a descendant of refugees from what is now Israel's southern Negev Desert. She said her grandfathers had lived in tents as refugees.

"I want to tell the world that the cause of our grandfathers is not dead," she added.

Gaza resident Ghanem Abdelal, 50, said he hopes the protest "will bring a breakthrough, an improvement, to our life in Gaza."

He had brought his family to a protest tent camp near Gaza City -- one of five set up several hundred meters from the border fence -- where he distributed water bottles to women and children sitting on a mat.

Israel had threatened a tough response, hoping to deter breaches of the border fence. The Israeli military released video showing a row of snipers perched on a high earthen embankment facing the Gaza crowd in one location.

Friday's high death toll and prospects of daily protests in coming weeks have raised concerns about another escalation along the volatile frontier. Israel and the Islamic militant Hamas have fought three cross-border wars in recent years.

The protest campaign is meant to spotlight Palestinian demands for a "right of return" to what is now Israel. A large majority of Gaza's 2 million people are descendants of Palestinians who fled or were driven from their homes in the 1948 Mideast war over Israel's creation.

The 70th anniversary of the establishment of Israel, on May 15, is marked by Palestinians as their "nakba," or catastrophe, when hundreds of thousands were uprooted.

The planned mass sit-ins on the border are also seen as a new attempt by Hamas to break the border blockade, imposed by Israel and Egypt after Hamas seized Gaza from forces loyal to its rival, Palestinian President Mahmoud Abbas, in 2007. The continued closure has made it increasingly difficult for Hamas to govern.

Other attempts to break the blockade, including wars with Israel and attempts to reconcile with the West Bank-based Abbas, have failed over the years.

The latest Egyptian-led reconciliation efforts collapsed earlier this month, when a bomb targeted but missed Abbas' prime minister and intelligence chief during a visit to Gaza.

Hamas and Abbas traded accusations after the bombing, signaling that any deal on Hamas handing the Gaza government to Abbas is increasingly unlikely.

The Hamas leader in Gaza, Yehiyeh Sinwar, said the protests are a signal to Israel and the world that "our people will not accept the continuation of the siege."

Israel and the Trump administration expressed concern in recent months about a looming humanitarian crisis in Gaza and appealed to the international community to fund large-scale development projects there, including a desalination plant.

However, such plans appeared to be linked to a deal on Abbas taking charge in Gaza, and Israel didn't say what it would do if such an arrangement didn't work out.

Friday's violence began before dawn when a 27-year-old farmer picking parsley in his field was hit by an Israeli tank shell in southern Gaza, the Health Ministry said. Another farmer was injured by shrapnel.

Later in the day, mosque loudspeakers urged Gaza residents to head to the border encampments. A Hamas-linked bus company ferried protesters to the area. In all, tens of thousands gathered at the encampments, though not all headed to the border, witnesses said. Other Palestinian factions also participated in organizing the protests.

The Israeli military reported "rioting" at half a dozen places and said it was "firing towards main instigators," BBC News reports.

"The large crowds ... reflect the Palestinian people's determination to achieve the right of return and break the siege and no force can stop this right," he said.

The military said thousands participated in the clashes.

Maj. Gen. Eyal Zamir, commander of the Israeli military's Southern Command, which includes the Gaza border, said he held Hamas responsible for the violence and alleged there were attempts to "carry out terror attacks under the camouflage of riots."

The military had doubled its standard troop level along the border, deploying snipers, special forces and paramilitary border police units, which specialize in riot control.

Friday's protest campaign began as Jews prepared to mark Passover, and it is scheduled to culminate with the start of Ramadan, the Muslim holy month, in mid-May.

The anniversary of Israel's founding will be particularly fraught for Palestinians this year.

The administration of U.S. President Donald Trump has pledged to move its embassy in Israel from Tel Aviv to Jerusalem to mark the occasion. The planned embassy move falls in line with Trump's recognition in December of contested Jerusalem as Israel's capital, a decision that has infuriated Palestinians who seek the city's Israeli-annexed eastern sector as a future capital.