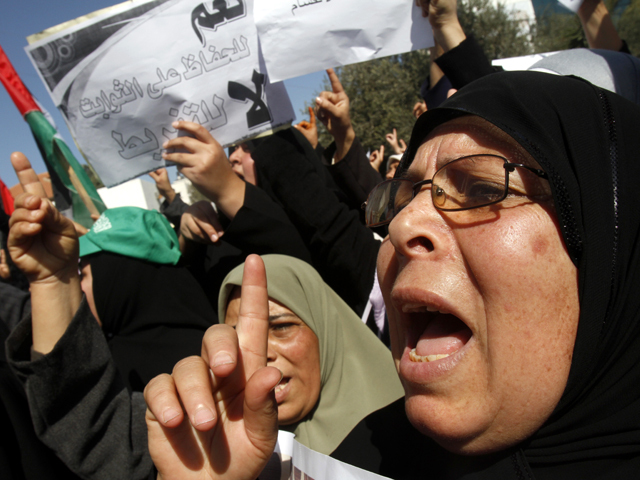 ATHENS, Greece - Pro-Palestinian activists who plan to breach Israel's sea blockade of the Gaza Strip said Tuesday that they had increased security around their docked flotilla after an alleged act of sabotage on one of the vessels in a Greek port.

In a statement, Scandinavian organizers said "hostile divers" had cut the propeller shaft of the "Juliano," a ship shared by Swedish, Norwegian and Greek activists. They said the damage can be repaired and that it will not affect plans to sail for the Palestinian territory toward the end of the week.

Even so, the 10-ship flotilla has already been delayed, beset by administrative problems with Greek port authorities that activists blame on Israeli diplomatic pressure. Greece's financial crisis raised the prospect of further complications, with protesters blockading the port of Piraeus as part of a 48-hour general strike that began Tuesday.

"We have increased alert on all the ships. We are having a 24/7 vigil," said Dimitris Plionis, a flotilla representative. He speculated that the alleged sabotage was carried out by "highly trained" individuals, possibly with a military or intelligence background, though he was not specific about the possible culprits.

Norwegian delegation leader Torstein Dahle said in a statement that the incident shows "someone is willing to go to great lengths to stop the flotilla from sailing."

Flotilla organizers said the "Juliano" had been taken out of the water and was in Perama, on the outskirts of Piraeus port near Athens.

Israel warns it will stop any attempt to break the sea blockade of Gaza, saying its measures prevent weapons from reaching Iran-backed Hamas militants who violently seized control in 2007. Last year, nine activists on a Turkish aid vessel died in a botched Israeli raid on a similar flotilla, with each side accusing the other of starting the violence.

Citing intelligence reports, Israeli military spokeswoman Lt. Col. Avital Leibovich warned that the new flotilla is carrying sulfuric acid for use against Israeli soldiers if they try to board the boats. She said the navy has trained for the past year to deal with various scenarios and has developed "soft power tactics" to cope with flotilla passengers without engaging in physical contact with them.

"Boarding on the ships will be the last resort for us. We are planning to ask the flotilla not to head toward the Gaza port," she said. Leibovich emphasized the Israeli soldiers' right to defend themselves from any attack.

Dror Feiler, one of the flotilla organizers, said between 300 and 400 activists hoped to set sail by the end of the month as planned, despite the snags they have encountered. He said participants were peaceful and he accused the Israeli military of spreading rumors that activists were arming themselves with chemicals and wanted to harm Israeli soldiers.

"If they have any knowledge of such substances or such persons, please inform me because I will take it away from the ships," he said. "I am more interested than they are" in doing so, because that would give the military a pretext to attack the flotilla, he said.

An international uproar ensued after last year's flotilla raid, and Israel eased restrictions on cargo crossing into Gaza by land. This month, Egypt reopened its Rafah passenger crossing with Gaza after maintaining its own blockade of the territory of 1.5 million people.

Flotilla leaders describe Israel's blockade as a human rights violation and dismiss calls to use Israeli-approved channels for distribution of medicine and other aid. Greece is the base of their operation, but they have previously not disclosed the exact location of their boats because of security concerns and fear that publicity would attract diplomatic pressure to scrap their mission.

Adam Qvist, the spokesman for the three-man Danish delegation in the flotilla, said a Canadian-flagged boat that includes activists from Denmark, Canada, Germany, Belgium and Australia was not in the same harbor as the vessel that was allegedly sabotaged.

"We are working to avoid sabotage by, for instance, not revealing anything about the ship or saying where it is anchored in Greece," Qvist said. "We have to be on our guard all the time."