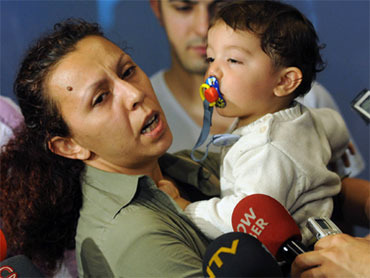 Activists returning to Europe after Israeli forces raided their aid flotilla said Tuesday that the commandos had beaten passengers and used electric shocks during the assault.

Six Greeks and several others, including a Turkish woman and her 1-year-old baby, were released Tuesday, but Israel has barred access to hundreds of others seized during the raid that killed at least nine people and wounded dozens early Monday.

CBS News correspondent Robert Berger in Jerusalem reports that about 600 activists and aid workers were arrested after the flotilla was escorted to the Israeli port of Ashdod following the raids, which took place in international waters. About two thirds of those aboard the aid ships were Turkish.

Turkey's prime minister on Tuesday called the raid a "bloody massacre," and warned that no one should test Turkey's patience.

Most of those killed were aboard the Turkish-flagged Mavi Marmara, and there have been conflicting accounts of what happened during the assault.

Israel said the activists attacked its commandos as they boarded the six ships taking tons of supplies to Gaza, while the flotilla's organizers said the Israeli forces opened fire first. CBS News correspondent Richard Roth reports that Israel claims the first five ships were boarded without incident, and the battle came on the sixth.

There were conflicting statements Tuesday from members of the "Free Gaza Coalition," which organized the flotilla, as to whether they would try again to thwart the blockade this week.

Another large cargo ship, the MV Rachel Corrie, left port in Ireland and was sailing toward Gazan waters Tuesday.

Dr. Arafat Shoukri, Director of the Council for European-Palestinian Relations, a partner in the "Free Gaza" aid operation, told CBSNews.com the Corrie was still three days away from the Middle East and that the flotilla's organizers "have not decided yet" whether it should continue on its path.

"We will decide in the coming two days," Shoukri told CBS.

However, Greta Berlin, another member of the coalition, told the Associated Press Tuesday that the Corrie, along with another boat full of aid materials, would arrive in the region late this week or early next week.

"This initiative is not going to stop," she said from the group's base in Cyprus. "We think eventually Israel will get some kind of common sense. They're going to have to stop the blockade of Gaza, and one of the ways to do this is for us to continue to send the boats."

The discrepancy in the two coalition members' stances could not be immediately resolved. CBS News was attempting to contact the coalition to clarify its stance on any further attempts to breach the blockade.

Turkish activist Nilufer Cetin, who had hidden with her baby in her cabin's bathroom aboard the Mavi Marmara, told reporters she believed there were 11 dead.

"The ship turned into a lake of blood," Cetin told reporters in Istanbul, having returned after Israeli officials warned that jail would be too harsh for her child.

"We were aware of the possible danger" in joining the trip, she said. "But there are thousands of babies in Gaza. If we had reached Gaza we would have played with them and taken them food."

She said Israeli vessels "harassed" the flotilla for two hours starting around 10 p.m. Sunday, and returned at around 4 a.m. Monday, fired warning shots and told the ships to turn back.

"When the Mavi Marmara continued on its course the harassment turned into an attack. They used smoke bombs followed by gas canisters. They started to descend onto the ship with helicopters," she said, calling the clashes that then erupted "extremely bad and brutal."

"I was one of the first victims to be released because I had a child," she told reporters, but "they confiscated everything, our telephones, laptops are all gone." Her husband - the ship's engineer - was still being held by Israeli authorities.

Some 400 Turkish activists were on the six-ship flotilla, along with more than 30 Greeks and people of some 20 other nations including Germany, the U.S. and Russia. Roth reports that nine of those in detention are thought to be Americans.

The ships had been trying to break the three-year blockade of Gaza to deliver humanitarian aid, the activists said.

In a move sure to anger Israel, an Egyptian official said Tuesday the government was temporarily lifting its blockade of the Gaza Strip to allow aid into the area a day after Israel's raid.

The governor of northern Sinai, Murad Muwafi, said President Hosni Mubarak ordered the opening of the border crossing to Gaza in the town of Rafah for several days. Muwafi said the opening of the crossing - which Egypt sealed after Gaza was taken over by Hamas militants in 2007 - was an effort to "alleviate the suffering of our Palestinian brothers after the Israeli attack."

Greek activist Dimitris Gielalis, who had been aboard the Sfendoni, told the AP he and his shipmates suddenly say "inflatables coming at us, and within seconds fully equipped commandos came up on the boat," said. He was among six Greeks returned home Tuesday.

"They came up and used plastic bullets, we had beatings, we had electric shocks, any method we can think of, they used," he said.

He said the boat's captain was beaten for refusing to leave the wheel, and had sustained non-life-threatening injuries, while a cameraman filming the raid was hit with a rifle butt in the eye," he said. "Of course we weren't prepared for a situation of war."

The returning Greeks said those still in custody were refusing to sign papers demanded by Israeli authorities.

"During their interrogation, many of them were badly beaten in front of us," said Aris Papadokostopoulos, who was aboard the Free Mediterranean traveling behind the Turkish ship and carrying mainly Greek and Swedish activists.

Papadokostopoulos said the flotilla was about 80 miles off Gaza when the raid occurred around 4 a.m. Monday.

"The Turkish ship was in front of us ... on which there was a terrible raid from the air and from the sea and from everywhere, with shooting," he said.

Aboard the other boats, he said, commandos beat activists, but nobody was gravely injured. He said no one put up resistance on the Free Mediterranean, which was carrying a cargo of wheelchairs, building material and medical and pharmaceutical aid.

"Some people were hit by clubs and electric shocks," he said.

Crew member Mihalis Grigoropoulos said he was on the bridge of the Free Mediterranean and heard shooting coming from the Turkish ship.

Several people who tried to stop the Israeli forces from getting to the bridge were hit by electric shocks and plastic bullets, he said. "We didn't' resist at all. Even if we had wanted to, what could we do?"

He said that, while in Israeli custody, authorities had demanded he sign a paper written in Hebrew. He refused, and was eventually given another document that he signed.

"Everyone who didn't accept to sign is in jail," he said.

Grigoropoulos, the crew member, and Gielalis said they were not asked to sign anything, though their cell phones, cameras and clothes were confiscated before they were expelled.

While the six Greeks "are in good health," Foreign Ministry Spokesman Grigoris Delavekouras said Greece was demanding the others still in custody be repatriated as soon as possible.

"Israel bears responsibility for their safety. So it must contribute so they can return quickly to Greece," he said.

Turkey said it was sending three ambulance planes to Israel to pick up 20 more Turkish activists injured in the operation.

Three Turkish Airlines planes were on standby waiting to fly back other activists, the prime minister's office said.