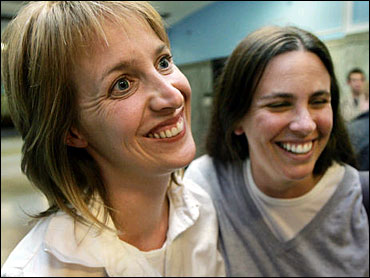 Eight marriage-minded same-sex couples lined up in court in Boston Tuesday, suing for the right to get married in Massachusetts, despite a 1913 state law which bans marriages for out-of-staters who can't legally marry in their home states.

Their attorney, Michele Granda of Gay and Lesbian Advocates and Defenders (GLAD), told Superior Court Judge Carol Ball that the law is discriminatory and should be struck down. Granda also asked for an injunction blocking the state from enforcing the law, which she says violates the U.S. Constitution.

"We're asking the court to tear down the fence of discrimination," said Granda, who wound up arguing the case at the same time as the U.S. Senate mulled a proposed constitutional amendment to ban same-sex marriage.

Massachusetts Attorney General Thomas Reilly has said that the since the eight couples are not from Massachusetts - two are from Connecticut, two are from Rhode Island, and one each are from New Hampshire, Vermont, Maine and New York - they do not have the legal standing to challenge the 1913 law.

That ruling, said Sacks, defines marriage as "two willing spouses and an approving state." Since no other state allows same-sex marriage, he said, that standard is not met anywhere but Massachusetts.

Judge Ball gave the state until Aug. 2 to file its response. She did not say when she would rule, but noted: "From what I've read so far, it appears the state is applying the law in a procedurally non-discriminatory manner."

Republican Gov. Mitt Romney, a same-sex marriage opponent, has invoked the 1913 law to bar same-sex couples from other states from getting married here.

When same-sex marriages began May 17, some municipal clerks openly defied Romney and issued licenses to anyone who applied. But Massachusetts' attorney general, acting on Romney's instructions, ordered them to stop.

Legal experts have said the law was passed to prevent interracial couples from getting married. But the attorney general has said there is no evidence lawmakers were motivated by race.

At any rate, the law was ignored for decades before the high court cleared the way for the nation's first state-sanctioned same-sex weddings to begin this past spring, Granda said.

Sacks did not dispute that assertion. "Certainly enforcement has been increased because there's much more reason than there was before to expect violations," he said.

Granda also argued the state is treating different groups of people unequally by enforcing the law. "The commonwealth can't use its formidable authority to bar gays and lesbians from marrying simply because they are gays and lesbians," she said.

Sacks said, however, that Massachusetts' enforcement of the law respects other states' rights. "People can come here from out of state to get married, if they're coming from a jurisdiction where it's recognized," he said.

Five of the couples who filed the lawsuit were married in Massachusetts by clerks who ignored the 1913 law, while the three others were turned away when they tried to get marriage licenses.