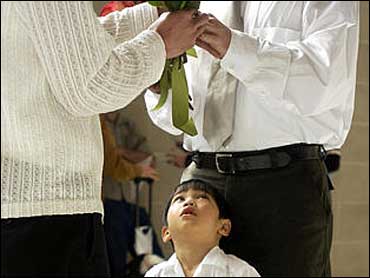 San Francisco is hosting a Valentine's weekend to remember - with weddings performed through President's Day.

With the nation debating the legality of gay marriage, San Francisco's mayor ordered that marriage licenses be issued to same sex couples.

The city even threw a party for all the newlyweds - who may well have believed they'd never be married at City Hall, reports CBS News Correspondent John Blackstone.

Though the legal status of the marriages is uncertain, there has been a stampede to City Hall. Some couples came from as far away as New York.

Mayor Gavin Newsom says, "We're getting calls literally from all over the country, saying, 'If I can get there in six hours, will you still be open?'"

The city clerk had to call in reinforcements. Ten officials have been deputized to perform ceremonies.

Sunday marks the fourth day in a row that officials issued the licenses to hundreds of gay and lesbian couples. The response has been so overwhelming that nearly 200 city officials, led by newly elected Mayor Gavin Newsom, have volunteered to pitch in, from sheriff's deputies providing security to clerks processing the licenses.

CBS News correspondent Vince Gonzales says thousands of couples will have made the move before the holiday weekend is over.

Not everyone, however, felt the joy.

Attorney Robert Tyler, acting for a group that opposes gay marriage, went to court to stop the weddings but the judge refused, at least until another hearing on Tuesday.

He calls the weddings "municipal anarchy."

Gonzalez says, "The licenses make it tougher for gay marriage opponents - who may now have to prove couples who sought and obtained a legal commitment for life broke the law."

Lawmakers are proposing a constitutional amendment that would define marriage a union between one man and one woman, and the Legislature resumes its deliberations of amendments on March 11.

Across the country, other gay couples didn't wait for a marriage license. About three dozen same-sex couples exchanged vows at Philadelphia's LOVE Park on Saturday as part of a "mass commitment ceremony" organized by a gay-friendly church.

Led by a minister, the couples gathered in front of Robert Indiana's famed "LOVE" sculpture - a rainbow flag draped under it - and repeated their vows.

"If they're not going to let us get married, we're going to do it anyway," said Dan Farley, shortly after exchanging silver rings with his partner, John McCann.