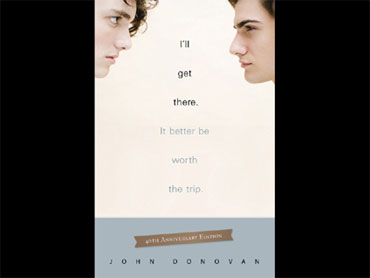 At his Kentucky elementary school, kids taunted Brent on the playground about being gay, whatever that was. By eighth grade, he realized what they meant and came out to a friend - and vice versa.

She was an avid writer, he a voracious reader. They headed to their school library in search of stories that spoke to their lives: gay, gay in the South, gay and fearing stereotypes like "disgusting" and "worthless."

"There were tons of books about gangs and drugs and teen pregnancy and there were no LGBT books. I asked the librarian about it and she was like, 'This is middle school. I can only have appropriate books here,"' said Brent, now 15 and heading into his sophomore year of senior high.

So they went to their public library, where they discovered plenty of romantic gay steam between covers - for adults. "We weren't complaining," said Brent, who asked that his last name and hometown not be used.

Turning next to bookstores, they finally found what they'd been looking for - a recent explosion in the publishing world of reads that speak to lesbian, gay, bisexual, transgender and questioning teens.

First came a gem, a book for young people that made them cry: Martin Wilson's 2008 debut, "What They Always Tell Us," set in Tuscaloosa, Ala. The story about a troubled year for two brothers, one of whom finds solace in a relationship with a boy, made him feel less like an "alien on your own planet."

A world of books followed. Brent read his way through Tom Dolby, Robin Reardon, Julie Ann Peters and David Levithan. He soon realized there were lots of coming out stories but he also craved romance, fantasy and paranormal books with characters who just happened to be gay, like Damien in the "House of Night" vampire series he loves by the mother-daughter team P.C. and Kristin Cast.

"I see the characters trickling into the mainstream genres. I really like that," Brent said. "It makes being gay feel natural, which it is, of course. Books give you hope."

Reads that speak to lesbian, gay, bisexual, transgender and questioning teens have traveled light years since John Donovan's "I'll Get There. It Better be Worth the Trip" led the way in 1969, now long out of print. The book on the confused world of 13-year-old Davy and the jock he kisses will be reissued in September from Flux, an imprint of Llewellyn Worldwide.

"This book made Harper & Row (now HarperCollins) very nervous," said Brian Farrey, editor of the new edition. "They weren't sure how people were going to take to it. It was the one that said it can be done for teens and there won't be people with pitchforks and torches waiting for you at the door. It opened the closet to teens and said you are not alone."

Well before gay characters began popping up in the mainstream on TV and at the movies, librarians embraced "I'll Get There," said Kathleen T. Horning, director of the Cooperative Children's Book Center of the School of Education at the University of Wisconsin-Madison. Another important forerunner was Nancy Garden's 1982 "Annie on My Mind" and its unabashedly happy ending for two 17-year-old girls who fall in love.

"Previous to that, there would be some awful car accident or one of the gay characters would die," Horning said, acknowledging that thread in "I'll Get There." "There was a sense that the gay character had to be punished somehow. They were kind of depressing."

"Will Grayson, Will Grayson," by Levithan and John Green, debuted on the New York Times children's best-seller list and stayed there for three weeks after its April release. It's a first for a young adult novel with major gay themes and has delighted hungry teen readers - fanboys and fangirls who were the likely reason the book became a trending topic on Twitter. Penguin has 60,000 copies in print.

In alternating chapters, Green and Levithan write of two 16-year-old boys with little in common, living in separate Chicago suburbs. One's depressed and struggling to come out and the other is straight with a flamboyantly gay friend in Tiny Cooper, a football star on the hunt for love - and stardom in musical theater.

"I AM tiny," said 20-year-old Andrew Casasanta, an English major at George Mason University in Fairfax, Va. "It's still very frustrating. I don't think that there's many characters out there that I can personally relate to and they're generally more stereotypes. It's important that this book, while having gay themes front and center, was written well."

It helps that Levithan is a prolific rock star in gay lit for young people with an acclaimed winner in 2003, "Boy Meets Boy." It also helps that Green is revered as a writer for teens, including his "Paper Towns" in 2008, and by fans of the adrenaline-infused videos he posts regularly online.

"Landing as high on the New York Times list as we did with `Will Grayson, Will Grayson' made a big statement to the children's publishing world that gay characters are not a commercial liability," Green said. "This is an important statement to make."

As gay-straight alliances spread in schools and kids reared by gay parents have kids of their own, books remain important survival tools for all young people trying to figure out who they are, said Lynn Evarts, a high school librarian in the farm country of Sauk Prairie, Wis.

"Kids have for the most part become 'Will and Grace'-ified," she said. "Oftentimes I'll hand them a book that has a gay main character and tell them how funny it is, and they take it and like it. These are kids who wouldn't normally touch anything like that. I live in the land of rednecks, but they like it because it's funny and good."

Funny and good is well and good for kids with access to LGBT lit. What about readers like Brent who don't have inclusive libraries, deep pockets or technology to download ebooks? Recent research in Texas, for instance, indicated a strong "I don't serve those teens" attitude among librarians.

"It's the argument that drives me crazy," said Teri Lesesne, who teaches young adult lit in the Department of Library Science at Sam Houston State University in Huntsville, Texas.

"It's like, `Yeah, you do.' They might not be coming in and saying, `Hi, I'm gay or I'm bi or I'm transgender or I'm questioning my own identity,' because they're afraid," she said. "But they're there and they're looking for these books."