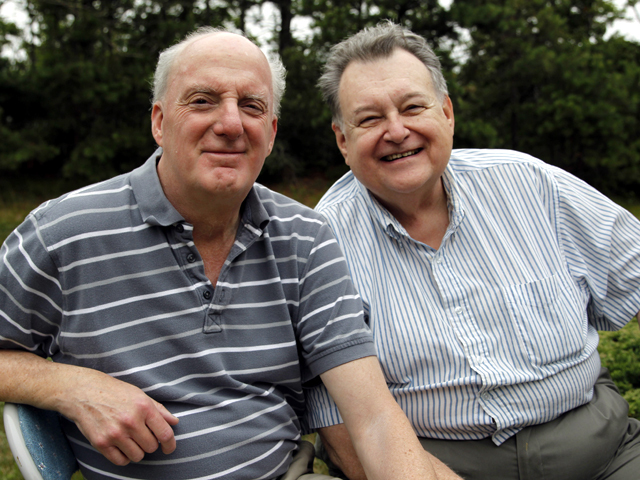 BOSTON - As same-sex couples in New York prepare this weekend to tie the knot, their brethren in Massachusetts — the first state to legalize gay marriage — have some advice.

Enjoy the wedding because afterward, they will realize that there are 1,000 or so benefits gay couples can't get because of the federal Defense of Marriage Act: Joint federal tax returns, federal health plans for spouses, and access to spouses' federal pensions.

"Let them enjoy their joy, but they will soon realize that their marriage is not being seen equally at the federal level," said Dorene Bowe-Shulman, who married her longtime partner, Mary, in 2004 in Massachusetts, the first state to legalize gay marriage.

New York's law takes effect at 12:01 a.m. on Sunday, with the state where the gay rights movement began more than 40 years ago joining five other states and the District of Columbia in legalizing same-sex marriage.

While many married gay couples are hoping for the repeal of the 1996 law, known as DOMA, the measure's supporters are pushing back, arguing that marriage is a union between a man and a woman and that repeal would violate the views of most Americans.

"That definition of marriage has been the position of the nation for many, many years, with the raising of children and the benefit to those children from a male-female household," said Carrie Gordon Earll, a spokeswoman at the advocacy group Focus on the Family.

DOMA says that traditional marriage "is something we value as a nation," she said.

As gay couples prepare for their weddings in New York, the largest state yet to legalize same-sex marriage, their counterparts in Massachusetts are telling them that their push for equal rights doesn't end with the ability to get married.

Dorene Bowe-Shulman and her partner were among a group of gay couples and widowers who filed a lawsuit challenging the constitutionality of DOMA, which prevents the federal government from recognizing gay marriages.

DOMA was passed by a Republican-led Congress at a time when it appeared that Hawaii would soon legalize same-sex marriage and opponents worried that other states would be forced to recognize such marriages.

The law's supporters say repeal would weaken traditional marriage and go against the will of most states, which ban gay marriage either through statutes or constitutional amendments. Since 2004, four other states legalized gay marriage: Connecticut, Iowa, New Hampshire and Vermont.

Opposition to DOMA has gained momentum over the last year after rulings by a federal judge in lawsuits by same-sex couples and the state of Massachusetts.

U.S. District Judge Joseph Tauro ruled last July that DOMA is unconstitutional because it interferes with the right of a state to define marriage. In February, the Obama administration announced it would no longer defend the law against challenges to its constitutionality.

This week, the White House said it supports legislation that would repeal DOMA.

The Respect for Marriage Act, sponsored by Sen. Dianne Feinstein, D-Calif., calls on the federal government to provide Social Security survivor benefits and other rights. It would not require states that do not allow gay marriage to provide same-sex marriage rights.

The Bowe-Shulmans were thrilled when they were allowed to marry. They had been together since 1996 and were raising two daughters together.

Dorene, 45, had cancer twice in her early 20s and wanted to make sure she had good health insurance. So the day after they got married, Mary filed papers to put Dorene on her family health plan at work at the Massachusetts Appeals Court.

Several weeks later, Mary, a staff attorney, was surprised to see a new deduction on her paystub. It was a $125 per month tax on Dorene's health care coverage. The federal government had entered the value of Dorene's coverage into Mary's pay, and then taxed it.

"Basically, they are saying, `We are allowing you to put this stranger on my health insurance policy, therefore we are going to take federal taxes out of that,"' Mary said. "Every time I get a paycheck from the state now, I have this separate line item on my paystub that nobody else I work with has."

For Al Koski and Jim Fitzgerald, the law has taken away their retirement security. Koski, 68, worked as a Social Security claims representative for more than 20 years before retiring in 2005. Koski and Fitzgerald have been together for 36 years and were legally married in Massachusetts in 2007.

Koski estimates that they pay at least $3,200 more per year in health care costs than they would have to spend if Fitzgerald, a recovery aide at a rehab center on Cape Cod, was covered under Koski's plan. They now purchase a separate insurance policy for Fitzgerald.

"We are legally married in the state of Massachusetts and we are being discriminated against," Fitzgerald said.

Like their counterparts in Massachusetts and other states that allow gay marriage, same-sex couples in New York will also not be allowed to receive one of the most popular financial benefits of marriage: filing joint federal tax returns.

Jonathan Knight. 31, and Marlin Nabors, 33, a Boston couple who married in Massachusetts in 2006, said they pay an extra $1,000 a year in taxes because they have to file separate returns. "It's not a devastating impact — it's not insignificant either — the point is more in principle," Knight said.

"We're paying a penalty tax for just being who we are," he said.

DOMA was not uppermost in the minds of longtime partners Alan Miles and Drew Glick as they prepared to get married in New York City. But Miles said he is optimistic the law will eventually be repealed.

"This weekend is very much about celebrating our love and commitment to each other," said Miles, 45, a client solutions executive at the Nielsen Co.

"I've just seen what happens when people are around people who are out and proud and happy, living their lives normally," he said. "I think as there are more and more of us, it will be absurd for DOMA to remain in place."