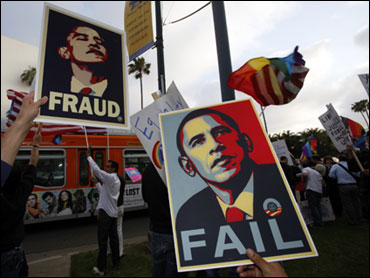 Eric Naing is a freelance journalist based in Washington, DC.


The contrast said it all.

Inside the Human Rights Campaign's (HRC) lavish Annual National Dinner on October 10, President Obama reiterated his promise to end "don't ask, don't tell" (DADT) and recounted the various nods his administration has made to the LGBT community. The audience, composed largely of donors who paid at least $250 each for a place at the table, greeted his remarks with wild applause. Outside, dozens of protesters, furious that the president had chosen to address a black tie fundraiser instead of the tens of thousands of activists who would be marching past the White House the next day, faced off against police motorcycles and the Secret Service.

This schism--between adoring Obama supporters and scornful demonstrators--wasn't just present at the HRC dinner. It could be found in the common refrain from many activists attending the National Equality March on October 11. "I voted for the guy but..." was their conflicted sentiment.

During his nearly ten months so far in the White House, President Obama has done things that have pleased the LGBT community (like posthumously awarding pioneering gay activist Harvey Milk with the Presidential Medal of Freedom and inviting gay families to the White House Easter egg roll) and infuriated it (like issuing a legal brief through the Justice Department defending the Defense of Marriage Act). But according to the LGBT activists and supporters who descended on Washington, fury, or at least frustration, with the president seemed to be trumping hope.

"We've heard enough talk out of this administration," said Andy Thayer, co-founder of the Chicago-based Gay Liberation Network, one of the activist groups protesting the president outside HRC headquarters. Citing the Defense of Marriage Act (DOMA) brief and Obama's embrace of evangelical preacher Rick Warren, Thayer urged people not to trust the president's promises and attacked him for addressing HRC.

"Speaking to these selected audiences does nothing for our community," he said. "All it does is allow a few A-list gays to kiss up to the president and potentially get some jobs."

Most Americans think the Tokyo Olympics should go forward

Aside from the venue, many LGBT activists also had plenty of criticism for what was, or more accurately was not, said by Obama in his HRC speech. Though he pledged his support for many of the items in the LGBT agenda, the president didn't mentioned any specific timeline for reaching those goals. David Mixner, a veteran gay activist for more than four decades who helped conceive the march, was both pleased and disappointed by the speech. "I thought it was progress that he went," Mixner said. "I thought his affirmation so strongly of what he previously declared was reassuring, but I was struck by the absence of some things." A couple things Mixner wished the president would have mentioned were the upcoming referendums in November to overturn same-sex marriage in Maine and domestic partnerships in the state of Washington.

When it comes to the four signature legislative actions at the core of the modern LGBT movement (repealing DADT and DOMA and passing a comprehensive hate crimes law and the Employment Non-Discrimination Act), the outlook is, not surprisingly, mixed.

Of these four legislative priorities, a hate crimes law, unofficially referred to as the Matthew Sheppard Act after the slain 21-year-old from Wyoming, is the closest to becoming a reality. If passed, the measure would expand the definition of a federal hate crime to include protections against crimes motivated by gender, gender identity, sexual orientation or disability. For more than ten years this legislation has failed to make it out of Congress, but now it is just one step away from reaching the president's desk. Last week the House of Representatives passed the measure, and it is widely expected to clear the Senate soon. If it does, the president has promised to sign it into law.

This hate crimes bill means a great deal to many in the LGBT community, particularly to some LGBT youth like 19-year-old Mary McDonough of Denver, who marched on October 11. "We need this protection because we're in the thick of it," McDonough said. "A lot of people in high school have to deal with this hatred and ignorance. I know that when I was in high school and middle school, I had a death wish because people were so cruel."

Though not nearly as far along, the legislation seen as mostly likely to follow the hate crimes bill on the LGBT agenda is the Employee Non-Discrimination Act, which would make it illegal for an employer to discriminate against an employee based on sexual orientation or gender identity. Like the hate crimes bill, some form of ENDA has been percolating in Congress for more than a decade. Also like the hate crimes bill, ENDA came surprisingly close to making it out of Congress in 2007 but was ultimately killed, at least in part, by a veto threat from President Bush.

Representative Barney Frank is pushing the measure in the House. Though the process has just begun, ENDA is very close to securing the 218 votes needed to pass the House--this time without resorting to 2007's odious compromise of dropping the gender identity provision from the bill. In the Senate, Democrat Jeff Merkley has introduced a version of ENDA, though it has much less support than its House counterpart.

Allyson Robinson, an associate director of diversity for HRC and a volunteer at the National Equality March, believes ENDA is a "crucial" step--particularly for transgender people like herself. "Transgender individuals are terrified to come out and live in the fullness of themselves, to be open and honest, because they're afraid of losing their jobs," she said. "In this economy, we can't afford that."

Next on the agenda is the infamous "don't ask, don't tell" policy, which prohibits gays and lesbians from serving openly in the military. Despite President Obama's promise to end the policy, he and Harry Reid, Senate majority leader, have punted on the question of who should lead on this issue. To Mixner, this is just a game of "political football." "President Obama is waiting for Congress to get a bill to his desk; Reid is saying show us leadership," he said. "I say a pox on both of their houses."

Mixner believes Obama has the power to end the policy right now but chooses not to do so. All the president would have to do is immediately cut off funding for all prosecution of gays and lesbians in the military and issue a stop loss order--essentially forcing Congress to act.

A bill to repeal DADT has been introduced in the House by Iraq War veteran and Pennsylvania Representative Patrick Murphy; and The Advocate has recently reported that the White House is in discussions with Connecticut Senator Joseph Lieberman, a longtime foe of DADT, about ending the policy.

But while this process lurches forward, soldiers like Lt. Dan Choi are still being forced out of the armed services. Then there are cases like Eric (who asked to be identified by his first name only), a 23-year-old Navy linguist who showed up in uniform at a DADT protest on October 10 even though he lives in constant fear of losing his job. "People are being oppressed for their lifestyle," he said. "Being in the military is not a 9-to-5 job. You have to do it all the time."

The final demand from LGBT activists is the repeal of the 1996 Defense of Marriage Act, which defines marriage as a legal union between one man and one woman. Over 1,000 rights are guaranteed to legally married couples. Without these rights, seemingly routine actions like a hospital visit become a nightmare for LGBT families. This is why Katie Edwards of Virginia marched to the Capitol on October 11 with her partner, Julie, and their 2-month-old son, Lincoln. "Our son is who's hurt by all this," said Katie. "I need to be able to take care of him if he gets sick, but I'm not the biological mother so I don't have the same rights to him as Julie does."

In his speech, President Obama called on Congress to repeal DOMA. Congress, however, hasn't gotten very far. Representative Jerry Nadler of New York has introduced legislation in the House creating the Respect for Marriage Act of 2009, but many lawmakers, including Frank, say the time isn't right.

Joe Lyman, a volunteer with the LGBT activist group Join the Impact, led a panel discussion on DOMA as part of the activist-organizing activities on October 10 and was equally dim on the short-term prospects of Respect for Marriage legislation. "I don't think it will happen in the near future," Lyman said. "Possibly in the Obama administration, but on this issue in particular you're more likely to see more victories on the state level."

But even these state-level victories can be fleeting as the upcoming votes in Washington and Maine, as well as the success of Proposition 8 in California, show.

This is why Cleve Jones, longtime LGBT rights activist and lead organizer of the march, has criticized the state-by-state strategy as "incomplete and impermanent." "True equality can only come from the federal government," he said. Jones's more federally focused strategy has been picked up by a younger generation of LGBT activists such as 25-year-old Wayne Ting, who is on the executive board of Equality Across America, the group behind the march.

"People here are done with compromise," said Ting. "There's no halfway on equality. Either you're a politician who believes in full equality in all fifty states or do not. That's it."

With Congressional midterm elections looming, Jones believes the LGBT movement can't afford to wait anymore. "A door opened with the election of Barack Obama and the Democratic majority in both houses, the fortieth anniversary of Stonewall, the film Milk, Proposition 8--all of these things combined to open a door," Jones said. "That door is swinging shut already."

By Eric Naing:
Reprinted with permission from The Nation