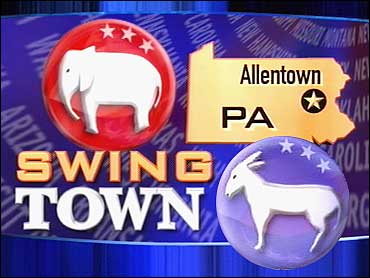 As part of our election-year "Swingtown" series, CBS News asked voters in Pennsylvania's Lehigh Valley – an area that's proven to be an accurate predictor of how America votes in presidential elections for 20 years – to share their stories.

Sarah Niebler is part of political science professor Chris Borick's team at the Muhlenberg College Institute for Public Opinion in Allentown, Pa., which is tracking voters' attitudes throughout the campaign season. Sarah took some time to explain what it's like trying to gauge the pulse of the Valley, which may echo the pulse of the nation.

Talking to residents of the Lehigh Valley never ceases to amaze me. This year alone, students working at the Muhlenberg College Institute of Public Opinion called 911 at least twice, were hung up on thousands of times and were told that young people have no respect for government and no appreciation of the political process. Despite these facts, through the spring semester alone, from January through mid-May, student pollsters have talked to thousands of residents of the Lehigh Valley and hundreds more Pennsylvanians who live outside the Valley region.

The first step of the polling process is trying to decide what questions to ask. Early in the election season we focus primarily on issues and favorability ratings of potential candidates. As the election progresses and draws closer, we concentrate on individual match-ups between specific candidates. We start the surveys with basic qualifier questions. In all surveys, we require respondents to be over the age of 18 and in some cases respondents must be registered voters.

After determining whether people are qualified to complete the survey, we then start in with the issue-based questions. We prefer to start as non-controversial as we can, by asking people what township or city they reside in, but depending on individual respondents, the level of controversy can rise quickly. This semester, we have asked people about many aspects of their quality of life, as well as what issue is most important to them as they decide whom to vote for in November. We ask people to rate the quality of various services in their communities, as well as whether the economy, the war on terror or lowering taxes is most important to them.

Throughout the course of the Lehigh Valley survey alone, Muhlenberg students talked to 401 Valley residents. After conducting the surveys, we run frequency distributions of the results. This is the first opportunity we have to look at the results as a whole. Looking at the initial responses in percentage breakdown is my favorite part of the whole survey process, because while I personally may talk to 25-35 residents, I have no idea if what my respondents are replying coincides with what the rest of the Valley population is answering.

After compiling the results from all the Valley respondents, we then look to see if numerous demographic factors influence how people answer specific questions. For example, maybe per capita income or gender influences whether people are more likely to vote for Bush or Kerry. Maybe the response to one question influences how residents will respond to a subsequent question. For example, in the Lehigh Valley survey, people who said the economy was the most important issue to consider in the November election were more likely to vote for Kerry, while people who said the war on terror was the most significant issue were more likely to show support for Bush.

Surveying may seem tedious at times, especially when a student pollster is on the receiving end of a political rant, but it can provide us with key information as we follow the presidential election. As we approach November, the Muhlenberg College Institute of Public Opinion will continue to survey Lehigh Valley residents, seeing how breaking news stories may affect people's perceptions of various candidates and issues.