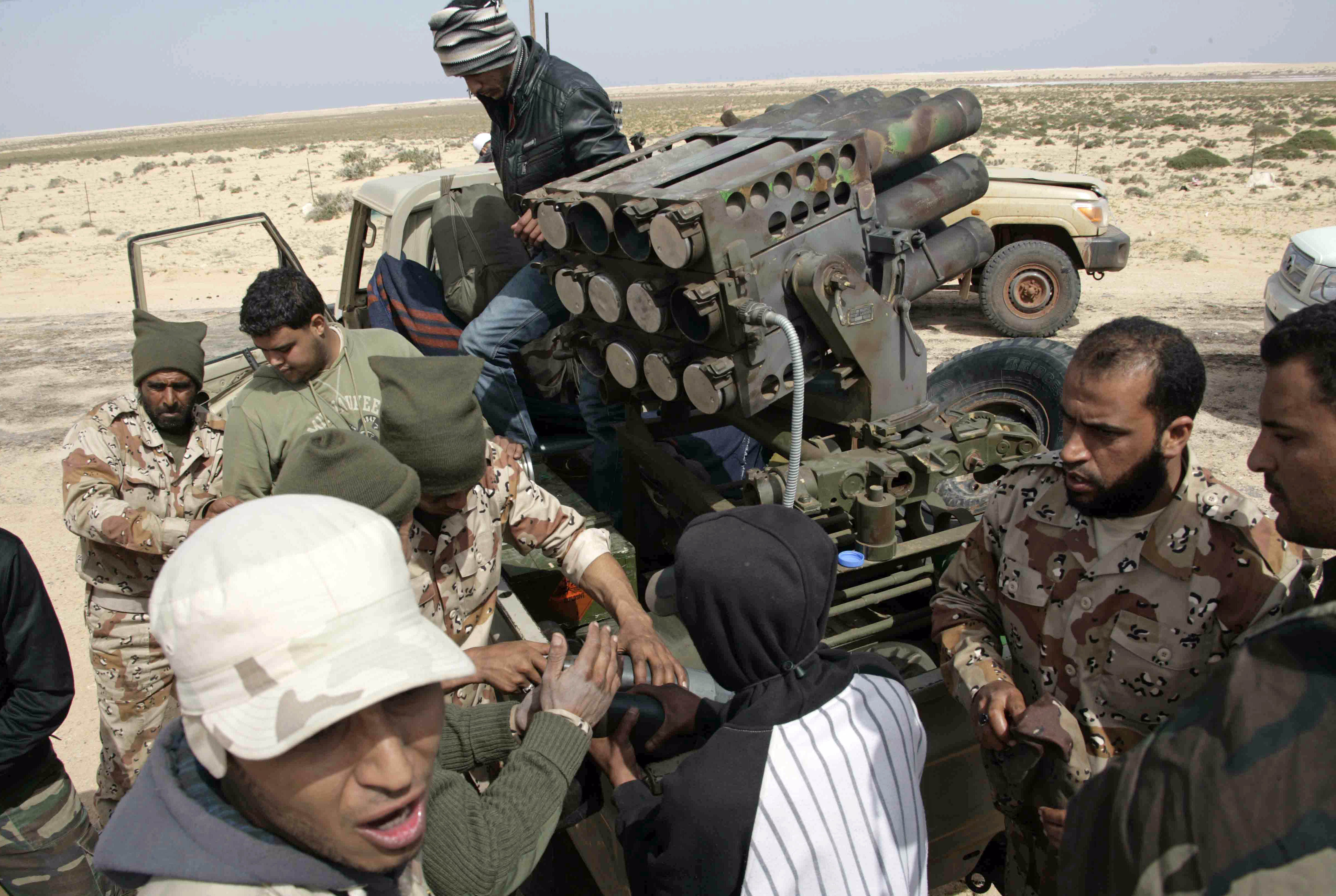 WASHINGTON - Defense Secretary Robert Gates told Congress that lack of command and control among Libya's rebels is a problem and described them as "disparate [and] scattered" with each element likely pursuing its own agenda.

Gates also said that the U.S. doesn't have "a lot of visibility into [the] opposition," as it weighs additional ways to assist them, including supplying them with weapons.

Gates and Joint Chiefs Chairman Mike Mullen appeared before the House Armed Services Committee Thursday, in the wake of new revelations that small teams of CIA operatives are working in Libya.

CIA likely in Libya to vet rebels, ID targets
CIA links up with rebels in Libya

Gates also said it will be political and economic pressures that will eventually drive Libyan leader Muammar Qaddafi from power, but the military operation will help force him to make those choices by degrading his defense capabilities.

He told lawmakers in both chambers that as NATO takes control of the military mission the U.S. will significantly ramp down its role in the operation. His comments come as Qaddafi's forces struck forcefully back at the rebels this week, recapturing lost ground and triggering pleas for help from the battered and failing opposition forces.

"The fact is, your timing is exquisite," McCain said. "At a time when Qaddafi has literally tragically routed the anti-Qaddafi forces, that's when we announce the United States is abdicating its leadership role and removing some of the most valuable assets that could be used to great effect."

U.S. forces will remain on alert in case the rebels seem in danger of complete collapse, but over the next few days unique aircraft like the AC-130 gunship and the A-10 ground attack jet will stop flying missions against Qaddafi's forces.

Joint Chiefs Chairman Mullen blamed the rebel reverses on bad weather, which has limited airstrikes. Qaddafi still enjoys a 10-to-one advantage over the rebels, even though about a quarter of his forces have been knocked out of action.

Mullen said, "That doesn't mean that he's about to break from the military standpoint because that's just not the case."

Gates said that as the air attacks continue, Libya's military will face a choice between being completely destroyed or deciding that it's time for Qaddafi to go.

The composition of the rebel force remains complex and largely unknown -- a situation contributing to the role of the CIA in Libya, which likely includes assessing rebel loyalties. As a country of sometimes opposing tribes and distinct regions, Libya in some ways resembles Iraq and Afghanistan, where disparate factions have complicated the nearly decade-long U.S. involvement.

"We don't have any influence or particular sway with the tribes," Gates said.

He outlined three possible outcomes for Qaddafi -- "Somebody from his military takes him out and cuts a deal with the opposition"; "The tribes abandon him and cut their own deals with each other"; or "our preferred option -- opposition forces and tribes come together with something more resembling a democratic state to protect the people."

Gates reiterated many of the policy positions regarding Libya put forth by President Barack Obama in his speech to the nation on Tuesday and by other members of the administration in recent weeks.

He said that military action in Libya was made necessary by the gravity of the humanitarian crisis in Libya and because the current unrest in the broader Middle East poses both "perils and promise for the United States." Gates said definitively that "there will be no American boots on the ground in Libya."

Even if opposition forces ask for American and coalition boots -- which they have so far said they do not want -- "I cannot imagine any circumstances under which the president would approve them," Gates said.

Mr. Obama has no additional U.S. military moves in mind, Gates said, and some country other than the U.S. should do the training and equipping of the Libyan opposition groups -- a capability not unique to the U.S. forces.

He put the cost of the U.S. involvement there at about $550 million so far, with an ongoing "run rate" at $40 million a month now that NATO has taken control of military operations.

While Qaddafi's ouster is desirable, the military mission "does not include regime change," Gates said.

"Personally I felt strongly about that. We've tried regime change before, and sometimes it's worked and sometimes it's taken 10 years," he said in an apparent reference to Iraq, where the U.S. has incurred "enormous human and fiscal cost[s]."

Many of the questions from committee members focused not on operations in Libya but on the Obama administration's authority to have undertaken the military engagement without congressional approval. Gates said that the administration believed that the action was legal, but could not point to the source of that authority under the War Powers Act, which requires a declaration of war, legislative approval, or an attack on the United States or its forces.

More than 20 nations contributing in "all manner of ways -- some public, some not so public," he said. "I cannot remember a time when so many nations mobilized so many forces so fast."

Congressional critics of both parties also pressed the military leaders on the possibility of a drawn out and the apparent contradictions in a policy that involves opposing Qaddafi but not officially seeking his ouster.

"Such a mismatch is a strategy for stalemate," Armed Services Committee Chairman Howard McKeon said.

"It's hard to imagine circumstances where we would be content to tolerate a government that still has Qaddafi as its head," Gates said.