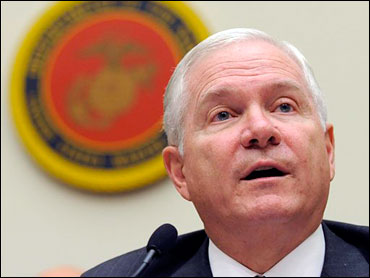 Seeking experience in a time of war, President-elect Barack Obama appears likely to keep Defense Secretary Robert Gates in that job - if only temporarily.

CBS News national security correspondent David Martin reports that a decision is close to keep Gates and may not be final until Mr. Obama and Gates have a face-to-face meeting.

Mr. Obama, who rolled out the key components of his economic team this week, plans to announce his foreign policy braintrust after the Thanksgiving holiday.

A Democratic official also told the Associated Press that retired Gen. James Jones was Mr. Obama's pick to head the National Security Council, the part of the White House structure that deals with foreign policy.

The officials spoke on condition of anonymity because Mr. Obama has not authorized anybody to discuss the deliberations.

Gates, a moderate with long-standing ties to Republican administrations and the Bush family, would fulfill an Obama pledge to include a Republican in his Cabinet.

Gates and Jones bring years of experience to the Cabinet of a 47-year-old commander in chief with a relatively thin foreign policy resume.

"This is good for Obama becuase it lets him say that he has a Republican in his Cabinet, and also gives him instant credibility with the military," Politico's chief correspondent Mike Allen told CBS Radio News.

"Gates tells us he's excited about being able to finish some of what he started and to wind down in Iraq in a way that's consistent with how they've been running the surge," added Allen.

Retaining Gates provides stability for a stretched military fighting two wars during the turbulent changeover in administrations. Gates once said it was inconceivable that he would stay on past the close of Mr. Bush's term on Jan. 20.

But the 65-year-old former spymaster had recently turned mum in public on the circumstances under which he would stay, even briefly, in an Obama administration.

Keeping Gates might afford Mr. Obama a sort of extended transition, in which critical military issues are left in trusted hands while Mr. Obama focuses most intensely on the financial crisis.

This is the first wartime presidential transition since 1968, when the Vietnam War was under way, and there is extra concern about security vulnerabilities during this handover.

Gates has run the department since December 2006, reluctantly giving up his post as president of Texas A&M University to replace Donald H. Rumsfeld when the Iraq war seemed to be failing.

He has gained a reputation as a steady pragmatist, but Gates' resume as a government policymaker is not untarnished.

During his 1991 confirmation hearings to be CIA director, Gates was criticized for missing clues about the impending fall of the Soviet Union and for politicizing Cold War intelligence. Those two complaints - misreading intelligence and using it selectively - have also dogged the Mr. Bush administration in its Iraq policy.

But supporters see Gates as a seasoned policymaker who climbed the CIA bureaucracy from an entry-level position to become director under President George H.W. Bush. He also served on his National Security Council, as he had for Presidents Jimmy Carter and Ronald Reagan.

Mr. Bush noted that Gates helped lead U.S. efforts to drive the Soviets out of Afghanistan in the 1980s while at the CIA and was deputy national security adviser during Operation Desert Storm, the first U.S.-led invasion of Iraq.

He was part of the 2006 Iraq Study Group, a bipartisan panel led by former Secretary of State James Baker III and former Rep. Lee Hamilton that was asked to help chart a new course in the flagging war.

A native of Kansas, Gates joined the CIA in 1966. By 1987, he became acting CIA director when William Casey was terminally ill with cancer.

Questions were raised about Gates' knowledge of the Iran-Contra arms and money affair, and he withdrew from consideration to take over the CIA permanently. Yet he stayed on as deputy director.

Then-national security adviser Brent Scowcroft, who has been a critic of the younger Bush's policies, asked Gates to be his deputy in 1989 during the administration of Mr. Bush's father. The elder President Bush asked Gates to run the CIA two years later.
Gates won confirmation, but only after hearings in which he was accused by CIA officials of manipulating intelligence as a senior analyst in the 1980s.

Gates took a much lower profile when he left the CIA and the government in 1993. He joined corporate boards and wrote a memoir, "From the Shadows: The Ultimate Insider's Story of Five Presidents and How They Won the Cold War."

Gates is a close friend of the Bush family. He was interim dean of the George Bush School of Government and Public Service at Texas A&M and became the university's president in 2002. The school is home to the elder Bush's presidential library.