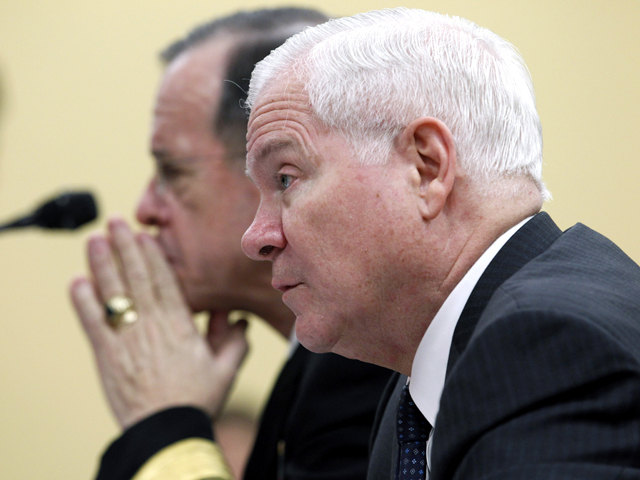 Although there is a lot of talk about establishing a no-fly zone over Libya, both the secretary of defense and the secretary of state made clear Wednesday it isn't going to happen anytime soon.

Secretary of State Hillary Clinton said on Capitol Hill that the Obama administration is a "long way" from making a decision about a no-fly zone, and Secretary of Defense Robert Gates explained why.

"Let's call a spade a spade," Gates said at a House Appropriations subcommittee hearing. "A no-fly zone begins with an attack on Libya to destroy the air defenses."

He added that it couldn't be done by a single aircraft carrier off the coast.

"It's a big operation in a big country," Gates said.

On top of that, Adm. Mike Mullen, the chairman of the Joint Chiefs of Staff, told the same subcommittee that the Pentagon has no confirmation that Libyan strongman Muammar al Qaddafi is using his air force to kill civilians.

In other words, there is no need to establish a no-fly zone, at least for now, and no desire within the military to do it period. The U.S. military has long experience with no-fly zones -- more than a decade over Iraq -- and knows what it takes, not just jets but tankers and early warning aircraft.

However, White House press secretary Jay Carney told reporters at his daily briefing that a no-fly zone is being "actively considered."

"We have not ruled any options out," said Carney. "The fact that the no-fly zone idea is complex does not mean it's not on the table."

As Gates pointed out, establishing a no-fly zone requires the use of force to take out the air defense sites that could shoot down any patrolling aircraft, and so far neither the U.N. Security Council nor NATO has authorized the use of force in Libya.