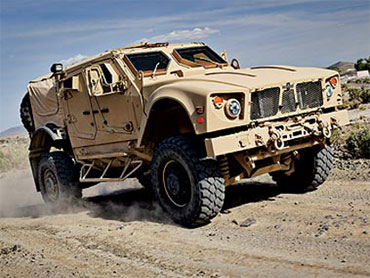 Defense Secretary Robert Gates says armored transport trucks that protect soldiers from roadside bombs are worth every dime spent on them.

Gates visited in Oshkosh, Wis., on Thursday to see the newest versions of the vehicles, specially designed for Afghanistan.

The trucks weigh 25,000 pounds — and they're lighter and more nimble than the version developed for Iraq.

Gates says he's making a new push to find ways to counter the bomb threat, which now accounts for 80 percent of casualties in the war zone.

Gates told employees of the vehicle's manufacturer, Oshkosh Corp., that they have the gratitude of countless U.S. troops and their families.

He said troops love the trucks and commanders sleep better knowing their soldiers have them.

Hundreds of employees gathered for Gates' speech. Many nodded when he said the work they do saves American lives.

The Pentagon has ordered about 6,200 of the vehicles. The contracts are worth more than $3.2 billion.

Meanwhile, Gates said Thursday that President Barack Obama wants to take the best elements from several options for the next U.S. steps in Afghanistan.

Gates told reporters that the decision is near on whether to add more U.S. forces to the 8-year-old war. Speaking to reporters accompanying him on a domestic trip, he said Obama did not choose any of the specific options laid out for him at a White House meeting on Wednesday. Instead, Gates said that Obama wants to select the best ideas from among many presented.

At issue is how fully to answer Obama's war commander, who wants about 40,000 additional U.S. forces and a reworked strategy. Gates would not spell out details of the four options presented Wednesday, nor what he thinks represent the correct approach.

Asked about the rejection of the options the military had presented, Gates said it was "more how can we combine some of the best features of several of the options to maximum good effect."

"There is a little more work to do," he said. "I do think that we're getting toward the end of this process."

One issue in the discussions has been, "How do we signal resolve and at the same time signal to the Afghans and the American people that this isn't an open-ended commitment," Gates said.