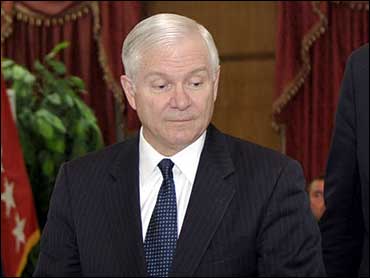 Defense Secretary Robert Gates said Monday the Air Force is not doing enough to help in the Iraq and Afghanistan war effort, complaining that some military leaders are "stuck in old ways of doing business."

Gates said in a speech at Maxwell Air Force Base, Ala., that getting the Air Force to send more surveillance and reconnaissance aircraft to Iraq and Afghanistan has been "like pulling teeth."

Addressing officer students at the Air Force's Air University, the Pentagon chief praised the Air Force for its overall contributions but made a point of urging it to do more and to undertake new and creative ways of thinking about helping the war effort instead of focusing mainly on future threats.

"In my view we can do and we should do more to meet the needs of men and women fighting in the current conflicts while their outcome may still be in doubt," he said. "My concern is that our services are still not moving aggressively in wartime to provide resources needed now on the battlefield."

He cited the example of drone aircraft that can watch, hunt and sometimes kill insurgents without risking the life of a pilot. He said the number of such aircraft has grown 25-fold since the terrorist attacks of Sept. 11, 2001.

He said he has been trying for months to get the Air Force to send more surveillance and reconnaissance aircraft, like the Predator drone that provides real-time surveillance video, to the battlefield.

"Because people were stuck in old ways of doing business, it's been like pulling teeth," Gates said. "While we've doubled this capability in recent months, it is still not good enough."

To push the issue harder, Gates said he established last week a Pentagon-wide task force "to work this problem in the weeks to come, to find more innovative and bold ways to help those whose lives are on the line."

He likened the urgency of the task force's work to that of a similar organization he created last year to push for faster production and deployment of mine-resistant, ambush-protected armored vehicles that have been credited with saving lives of troops facing attacks by roadside bombs in Iraq.

"All this may require rethinking long-standing service assumptions and priorities about which missions require certified pilots and which do not," Gates said, referring to so-called unmanned aerial vehicles that are controlled by servicemembers at ground stations.

The military's reliance on unmanned surveillance and reconnaissance aircraft has soared to more than 500,000 hours in the air, largely in Iraq, according to Pentagon data. The Air Force has taken pilots out of the air and shifted them to remote flying duty to meet part of the demand.

Gates, who served in the Air Force in the 1960s as a young officer before he joined the Central Intelligence Agency, urged the officers in his audience to dedicate themselves to thinking creatively.

He said the Air Force and the other branches of the military need to protect those in their ranks who are maverick thinkers, who defy convention and push for creative solutions to hard problems. He said he intended to make a similar point about the value of dissent in the military in remarks later Monday at the U.S. Military Academy at West Point, N.Y.

"Dissent is a sign of health in an organization, and particularly if it's done in the right way," Gates said.

Gates made no direct mention of a series of mistakes and missteps involving the Air Force in recent months, beginning with an episode last August when a B-52 bomber flew from an Air Force base in North Dakota to another in Louisiana with the crew unaware that it was carrying nuclear weapons.

Last month Air Force Secretary Michael Wynne announced that four Air Force nose cone assemblies designed for use with nuclear missiles were mistakenly shipped to Taiwan in 2006. The error was not verified until shortly before Wynne made the announcement, and the matter is under Pentagon investigation.