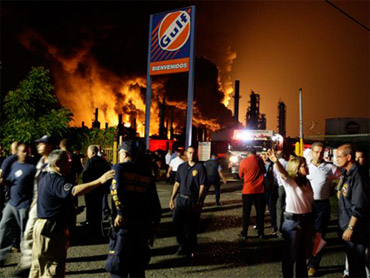 Crews struggled to contain a huge, smoky fire at fuel storage facility outside Puerto Rico's capital Friday following an early morning explosion that knocked out windows and shook the ground in the U.S. territory.

A plume of inky black smoke loomed over the island, forcing the U.S. Federal Aviation Administration to divert plane traffic and keeping school children at home. Authorities warned that more tanks could explode before the fire is extinguished.

The cause of the explosion at the Caribbean Petroleum Corp. in the suburb of Bayamon was unknown.

Gov. Luis Fortuno said only one person has required treatment for smoke inhalation, and two others suffered minor injuries at the U.S. Army's Fort Buchanan base adjacent to the fuel plant, which supplies Gulf gas stations across the island.

Several drivers were also hurt when the explosion shattered glass in their cars, but firefighters said all the plant workers were safe.

Marcial Orlando Felix, the top local official for the U.S. Bureau of Alcohol, Tobacco, Firearms and Explosives, said a special team from the mainland would investigate the blast but would have to wait until the fire is out to enter the plant.

The 12:30 a.m. blast was the equivalent of a 2.8 magnitude earthquake, according to the Puerto Rico Seismic Network.

Police and FBI agents were also investigating graffiti that was found Friday after the blast in a highway tunnel in the capital with the message: "Boom, fire, RIP, Gulf."

"Everything is very preliminary at this point but obviously we're looking into the graffiti and it's a concern," Figueroa Sancho said.

Fortuno said 11 of the 40 fuel tanks were on fire at the plant, which includes a gasoline warehouse and distribution center on a bay across from the U.S. territory's capital. Caribbean Petroleum owns the Gulf brand in Puerto Rico.

Eighty-five firefighters with 20 fire trucks were working to contain the fire and chill the remaining tanks to prevent further explosions, according to Fortuno.

The flames, which could be seen from miles away, intensified several hours after the explosion and police chief Jose Figueroa Sancha said it would likely take several days to put out the fire.

Authorities were evacuating people from communities downwind from the thick smoke. About 80 people living in a secure facility for Justice Department witnesses were also moved elsewhere, according to attorney general Antonio Sagardia.