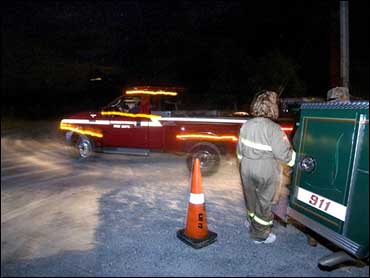 Emergency workers speculate that after the first victim was overcome Monday, the others climbed into the pit in a frantic rescue attempt. "It was a domino effect with one person going in, the second person going after them," Rockingham County Sheriff Don Farley said.

"When these fumes hit you, it takes a matter of seconds, and it's my guesstimate that these people were dead before they actually hit the floor," Farley told CBS News.

Farley identified the victims as Scott Showalter, 34; his wife, Phyillis, 33; their daughters, Shayla, 11, and Christina, 9; and Amous Stoltzfus, 24, who worked at the Showalters' dairy farm in the Briery Branch community.

The accident began when Scott Showalter tried to transfer manure from one small pit to a larger one, measuring 20 feet by 20 feet and 8 feet deep.

The pipe that was transferring the manure became clogged, and Showalter climbed in the pit to fix the blockage, Farley said.

"This was an activity this farmer has probably done a hundred times," Farley said. "People have to go in and check their equipment," but for some reason, the fumes had not left the pit this time.

"This is the first time in my 25 years in law enforcement that we've had this happen in a manure pit, and then to have it happen to five people, just multiplies it that much more on the tragedy site of it," Farley said.

Emergency workers believe Stoltzfus climbed into the pit in an attempt to rescue Showalter. Phyillis Showalter and the two girls were outside the milking barn, heard the commotion, then all went into the pit and succumbed to the deadly gas.

Methane gas is an odorless and colorless byproduct of liquefied manure. The pit was nearly enclosed and poorly vented, Farley said.

Farley said the deaths were called in by another person on the farm, whom he declined to identify.

"By the grace of God that person did not go into that pit," he said.

The Showalters, who also had two younger daughters, milked 103 cows on their farm west of Harrisonburg in Virginia's Shenandoah Valley. The area has a large concentration of Mennonites, who shun most of the trappings of modern life.

"It's a very tight community," Farley told The Associated Press. "They will be ministering to each other and counseling each other. It's very fortunate that they have a very strong faith to help them through this."

Farley said the Showalter farm was a modern dairy operation. "Their faith did not deter any safety precautions," he said.