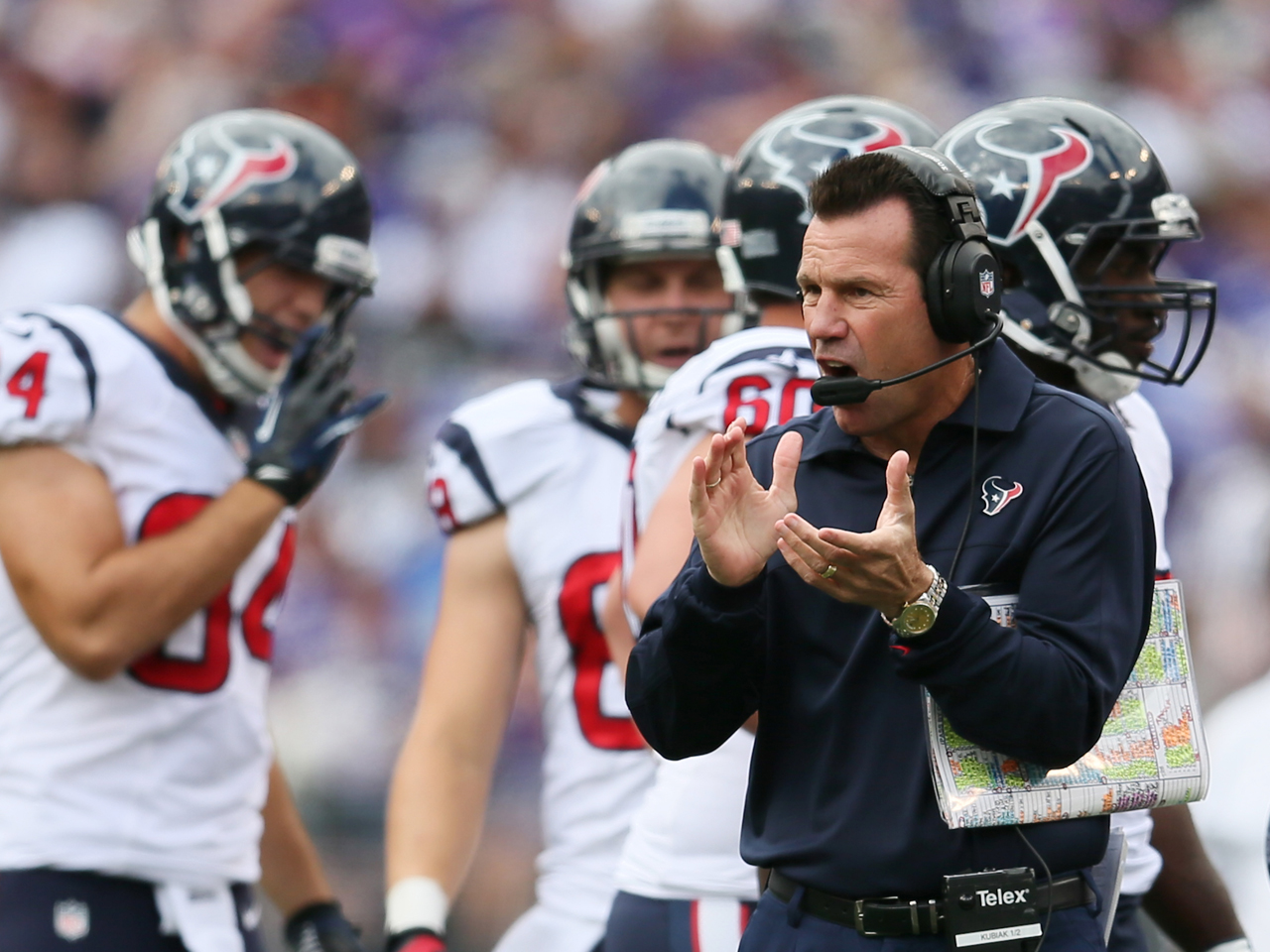 When Houston Texans head coach Gary Kubiak was sent to the emergency room in the middle of Sunday night's game, many viewers wondered about the 52-year-old's health after watching the circumstances unfold on national television.

Kubiak was seen dropping to his knees when he was heading off the field during halftime of the Texans versus Colts game.

The Texans said in a statement that Kubiak felt dizzy and light-headed, CBS Sports reported. He was examined by the team's medics and taken off the field in a stretcher. Kubiak was then sent to an undisclosed hospital in an ambulance.

"All of his vital signs are good," defensive coordinator Wade Phillips said in an article on the team's official website. "He did not have a heart attack, but they are still checking on everything with him."

Kubiak went through various tests at the hospital and was admitted overnight. The Texans reported that he is expected to stay there through at least Monday.

ESPN's Adam Schefter tweeted that Kubiak was treated intravenously with tissue plasminogen activator (tPA), a clot-busting medication typically given to people who are suspected of having had a stroke.

It is important to note it has not been confirmed that Kubiak had a stroke on Sunday.

Dr. M. Shazam Hussain, who heads the Stroke Center at the Cleveland Clinic and did not treat the coach, explained to CBSNews.com that tPA is effective when it is administered shortly after the start of a stroke, usually within four hours. It works by breaking up clots so that blood can return back to the brain.

A stroke is caused when blood flow to the brain stops, which stops the organ from receiving blood and oxygen. This can cause cells to die, and may cause lingering damage and result in disability.

A transient ischemic attack (TIA), or "mini stroke" is caused by a temporary blockage, with symptoms lasting a shorter amount of time.

"There's such a short time window that sometimes we would administer those medications to someone who was highly probable to produce a stroke," said Hussain.

Strokes can affect people of any age, but the risk increases with age for those 65 and older. Hussain said the rate for this age group is about 1 out of every 1,000 people.

The rate for those younger than that is much lower, and about 1 out of 10,000 patients will suffer from the condition. Hussain points out that recently he has seen more younger patients with high risk factors for stroke including high blood pressure, high cholesterol and conditions like cholesterol buildup in the arteries experiencing strokes. A recent study showed that the stroke rate among adults under 65 has increased by 25 percent in the past two decades.

The good news is that strokes do not always cause long-lasting damage.

"It depends on how severe a stroke is," Hussain said. "Certainly there are some patients that do very well and have no damage from the stroke or very minimal injury. They can return to usual activities very quickly afterwards."

Hussain pointed out that tPA can also be used for other conditions, like heart attacks, or for other neurological problems that are caused by blood clots.

While lightheadedness and dizziness are among the symptoms for stroke, these could also be signs of seizures. Hussain said seizures are the most common condition that mimics strokes. Other stroke and seizure symptoms include face weakness, arm weakness and speech difficulties depending on which area of the brain is affected.

Since tPA can cause side effects like additional bleeding in the brain, doctors try and quickly rule out other conditions by performing a battery of tests, even if it seems likely that a patient had a stroke. Hussain said this usually includes ordering an X-ray or CT scan to see if whether there is bleeding in the brain.

"The good news about that is, that the risk of any problems with the (tPA) medication with those stroke mimics is low, so many patients get the medication just in case," Hussain said.