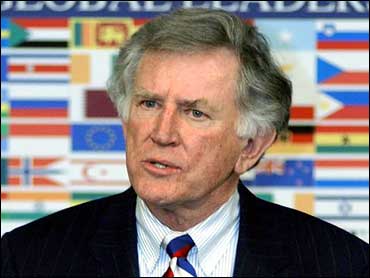 Gary Hart, the 1988 Democratic front-runner who was forced to abandon his presidential bid due to scandal, said Tuesday he will not try to make another run for the White House.

"I've concluded that I do not have sufficient enthusiasm for the mechanical side of campaigning, the money, the media and the polling and so forth to go forward with a campaign," Hart said in a telephone interview.

The 66-year-old former Colorado senator, who sought his party's nomination in 1984 and 1988, had been weighing a bid for the Democratic nod since January. During the last four months, Hart has been meeting with Democratic activists, delivering policy speeches and traveling to key early states while nine other Democrats entered the race.

Since leaving politics, Hart has been busy practicing law, writing more than a dozen books — both fiction and nonfiction — and offering his expertise on the military and national security.

Hart said recently that he remained very interested in finding a way to serve his country, though he acknowledged "15 years is a long time" to be out of politics.

Hart's prescient assessment of the terrorism threat and his ahead-of-the-curve recommendations on reconfiguring the military into a more agile, mobile force similar to Defense Secretary Donald H. Rumsfeld's blueprint helped fuel interest in his potential candidacy.

As Hart emerged from private life this year, he has been frequently confronted by questions about his departure from the race in early 1987 because of his involvement with model Donna Rice. He rejoined the race later that year before dropping out in early 1988. Asked recently what effect the scandals of the 1990s, including President Clinton's involvement with intern Monica Lewinsky, would have on public interest in his exit from politics in the late 1980s, Hart said simply: "I don't know."

In the 1980s, Hart was the Democrats' insurgent newcomer, boasting of new ideas and a centrist approach that he said could revive the struggling party. In 2003, the gray-haired Hart hoped to be more of a Democratic senior statesman.

In recent years, Hart was co-chair of the U.S. Commission on National Security, which forecast the new age of terrorism, and he served on a task force on homeland security for the Council on Foreign Relations.

Hart has long had a reputation as one of the most creative and thoughtful of politicians, earning a doctorate of philosophy at Oxford University in 2001 and has law and divinity degrees from Yale.

Active in Democratic politics for more than three decades, Hart served as George McGovern's campaign manager in the 1972 Democratic nominee's unsuccessful bid for the presidency.

He was elected to the U.S. Senate in 1974 and served through 1986. He ran for the presidency in 1984, when he gave eventual nominee Walter Mondale a scare by winning the New Hampshire primary. In the warmup to the 1988 race, Hart was off to a very fast start before the scandal forced his early exit.