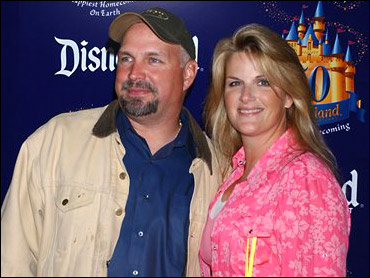 Country music stars Garth Brooks and Trisha Yearwood said "I do" on Saturday in a private ceremony at their Oklahoma home.

Brooks, an Oklahoma native, and Yearwood exchanged vows before family members, said Nancy Seltzer, a publicist for the couple.

"They said it is the perfect Christmas gift to each other and they couldn't be happier," Seltzer said. She declined to provide any other details.

Brooks, 43, got down on one knee and proposed to Yearwood, 41, in May in front of 7,000 fans at the "Legends in Bronze" event at Buck Owens' Crystal Palace in Bakersfield, Calif. Ten larger-than-life bronze statues honoring country stars were unveiled during that event, including one of Brooks.

The marriage is the second for Brooks, who has three children, and the third for Yearwood.

Brooks is credited with widening the genre's appeal in the 1990s by merging traditional country with honky tonk, pop, folk and rock. His "Ropin' the Wind" album was the first such country recording to debut at the top of the pop music charts. His latest album, "Scarecrow," went triple platinum.

Yearwood was named the Country Music Awards female vocalist of the year in 1997 and 1998. Her latest album is "Jasper County."