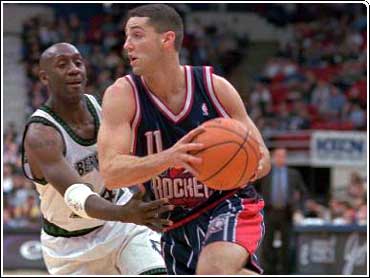 One assist shy of his third career triple-double, Kevin Garnett drove the lane, found the ball back in his hands and ...

Instead of dishing it off to a teammate again, he fired up a nifty left-handed hook shot, probably the first basket of his career that drew groans instead of cheers at Target Center.

"We tried just a little bit" to get him the triple-double, coach Flip Saunders said after Garnett's 23 points, 18 rebounds and nine assists led Minnesota to a 102-85 rout of the Houston Rockets on Friday night.

"I was just telling him to pass it at the end instead of shooting it, you know?"

Not that Saunders was complaining.

"He made that nice left-handed jump-hook. We've been trying to get him to do that for two years. So, I'm not going to yell at him for shooting that one," Saunders said with a chuckle.

Garnett, who came out 10 seconds later, with 1:34 remaining, wasn't about to grouse over his missed opportunity, either.

"No, man. You know what? This game's about winning, man. And we win ... I don't care about no triple-double," Garnett said. "I enjoy the fact that Bobby Jackson is playing well. William Avery is coming in and playing well. Our team is in the flow. That's what I care about."

"I really don't care about triple-doubles and stuff. It would be nice, but ... tonight we shared the ball tremendously and we won, that's what's important to me."

The Rockets stood no chance with Garnett on top of his game and their sensational rookie guard Steve Francis back home in Houston getting treatment for a hernia.

Francis, averaging 18.3 points, 5.3 rebounds an7.1 assists, was expected to rejoin the team Sunday in Detroit.

The Rockets also were missing their shooting touch, hitting just 38 percent from the floor.

Garnett, too, was off the mark in the first half, when he was 1-for-7 from the field. He made up for that with 11 rebounds and seven assists, helping the Wolves to a 52-35 halftime lead.

Garnett hit his first five shots in the third quarter and the Wolves cruised to their 19th victory in 24 games.

The best display of Garnett's athleticism didn't even come on the court. He drew raves for hurdling a woman in the front row as he chased a loose ball in the third quarter.

"He's all over the place. The guy's great," Tomjanovich said. "Before, they used to say he's a tremendous athlete with skills, but now AI think you've got to call him a shooter. He can make shots along with all those other things."

The Wolves took control at 38-20 with a 16-0 run sparked by Anthony Peeler, a double-digit scorer off the bench for five straight games. He scored three baskets during the run and swished a 3-pointer after Bryce Drew broke the drought.

Drew started in place of Francis and led the Rockets with a career-best 20 points.