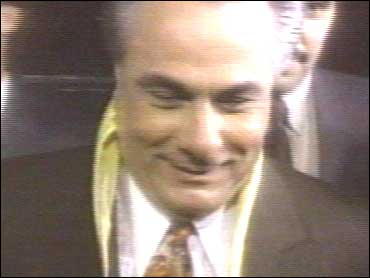 Who's the most celebrated mobster in America today?

Well, nobody really. In fact, most Americans, if asked that question, would probably answer "Tony Soprano." That's both a tribute to the widespread appeal of the HBO hit, "The Sopranos," and evidence that there isn't much life left in the real mob.

This is a story about two mobs — the fictional mob of Tony Soprano, which is so popular, and the real Italian-American mob, which is on its last legs. Listen to the story of what happened to a real life mobster when she - that's right, she - decided to turn informer. Bob Simon reports.

"I had no other out. I was not going away for a long time for those guys. I wasn't doing it," says this woman, Andrea Giovino. It would be easy to mistake her for a real-life Carmela Soprano. But don't be fooled. Unlike Carmela, Andrea was not just "married to the mob," she was a mobster herself.

Giovino was only a small-time crook: Loan sharking and money laundering were her specialties. Though she once gave the go-ahead for murder; some hoodlum who had threatened to kill her brother got rubbed out instead. Given her mob background, one might assume that Andrea would be a big fan of the Sopranos. But she's not.

She doesn't watch it regularly, and she doesn't enjoy it "at all." Why not? "Because it's not real in so many ways. It's just not real."

But to millions of fans, the HBO show is real, an honest and brutal portrayal of a mob boss and his suburban family. Now in its fourth season, "The Sopranos" has won raves from critics and audiences everywhere, and has become an indelible part of American pop culture.

We took a bus ride recently, a kind of magical Mafia tour of New Jersey. For $30, Simon joined a Sopranos bus tour, and with a lot of Soprano fans, listened to the spiel of tour guide Marc Baron. Baron, a would-be actor, is an expert when it comes to Sopranos' trivia.

"This is the Jersey Turnpike extension and to our left, right through these cement pylons, up that dirt road, is where they buried the Czechoslovakian guy," Baron told tourists. "Tony Soprano's company is called Barone Sanitation, and originally he was gonna be called Tommy Soprano. Does anyone know who the casting director is for this show? Christopher Walken's wife."

The tour passes many of the sites where the Sopranos is filmed. "You remember when Big Pussy met FBI agent Lapare in the abandoned lot? Right across the street is the lot," Baron continued.

Among the stops is the Bada Bing club, where Tony and his mob pals hang out. In the real world, there is no Bada Bing Club; it's actually a local New Jersey strip joint. But no matter: For the fans on this bus, Tony Soprano is the real deal, an authentic American folk hero.

Simon asked one tourist why he liked Tony so much. "(He) just seems like a pretty sharp guy. I wish I could be him," the man said.

But not so fast! Tony leads a very stressful life. He suffers panic attacks, sees a shrink, takes Prozac, and worst of all, feels the law breathing down his neck.

Tony suffers and gets depressed because he knows the glory days of the mob are over. And he's right. To be a Mafioso today is to belong to a vanishing breed. Just take a walk down Mulberry Street in New York's Little Italy.

Mulberry Street isn't what it used to be - all you see on the street these days are tourists. But years ago, before they turned it into a mall, Mulberry Street was "Wiseguy Way." It was where real mobsters twirled their linguini; where Crazy Joe Gallo got himself whacked; where John Gotti ruled.

Before the feds sent him away, Mulberry Street was Mr. Gotti's neighborhood. And the "Dapper Don" played the role for all it was worth — he was the gangster as celebrity. Gotti and his cronies hung out at what was once the infamous Ravenite Social Club. But the Ravenite's gone now. And so is John Gotti.

"Oh, John Gotti was a very powerful guy," says Jerry Capeci, who has decades of experience working the wiseguy beat as a newspaper reporter and an author. He wrote "The Complete Idiot's Guide to The Mafia." And now he has his own Web site, Ganglandnews.com. Capeci says the Mob isn't dead by a long shot, but the federal government has broken its back, largely by getting so many mobsters to sing.

"Right now, in 2002, they're actually turning wiseguys away from becoming cooperating witnesses," Capeci says. "Now you have to have something important to give them that they don't have from somebody else."

The whole mythology of the mob, the code of "omerta," or silence, is gone. "There are more people trying to become cooperating witnesses simply to save their asses, save their necks. I mean, they're not looking to spend the rest of their lives in jail," Capeci says.

Nor was Andrea. If you want to know how betrayal became the theme song of the Italian-American mob, listen to Andrea's story.

"I was facing 10 years. They had a solid case against me," says Giovino.

Even as a kid growing up in Brooklyn, Andrea had already been exposed to a life of petty crime. For that, she can thank her mother.

"She was running crap games in the basement of our home for, I think it was in the '50s, for Crazy Joe Gallo," Andrea says. Andrea was about 6 years old at the time. "I kind of thought, believe it or not, that's normal. I mean, 'cause that's really all I knew," she says.

As the years went by, the only gentlemen who came calling were wiseguys. Andrea's mother encouraged that. Mom's advice: "Marry a mobster."

"Because in the neighborhood, you have to remember, a doctor is a nobody. A lawyer is a nobody. A mob guy is somebody. He's the guy that everybody in the neighborhood is respecting and has power and look up to and fears. They fear. And you can go, also, in any restaurant and say, 'Oh, put it on this guy's bill.' So she liked that. 'Oh, put it on his bill.' The shakedown," she says with a laugh.

So Andrea took her mom's advice and married a mobster. They raised four kids together. But Ozzie and Harriet, they weren't. Life outside the family was pretty gruesome.

But the lifestyle was very good while it lasted. Andrea wore fur coats, always drove a Mercedes, had lots of dough, and knew the right people – including Gotti himself.

"I knew John very well," she says. "I liked John; yes, I did. I think John was a gentleman. He always was a gentlemen around women. If somebody at the table cursed, he would definitely correct it and say, 'There's a lady sitting here, don't use that language.'"

From that description, Gotti sounds like a pretty normal guy, someone you'd look up to. But the reality was different, Giovino says: "That's on the outside. That's a whole façade. The person inside that lurks within these types of personalities are sociopaths, psychopaths."

In 1992, Gotti's days as don came to an end. The feds finally nailed him and put him away for the rest of his life. He died in prison last June. The government built its case on wiretaps and on the turncoat testimony of Gotti's top aide, Sammy "The Bull" Gravano.

"When Sammy broke that silence, it broke it for many, many people," says Giovino. "People were turning left and right in these cases. You arrest 20 guys, I guarantee you six out of the 20 are gonna turn."

After years of keeping silent, Andrea herself turned informer. She didn't know it, but the government was listening in, wiretapping her home phone. Andrea was heard conspiring to distribute drugs. Federal agents raided her house early one morning, told her she was facing 10 years in prison, and made her an offer she could not - and did not - refuse.

So Andrea played ball with the feds, and they got her and her kids out of New York in a hurry. She says threats were made against her life. The feds relocated Andrea to a place in the country - she asked us not to reveal where. She's writing a book about her mob years, hoping Hollywood buys the book and makes the movie. Andrea dreams of hits and killings of a different sort now. She also got un-married to her mobster, and imagines a family life without wiseguys.

So the feds relocated Andrea to a place in the country - she asked us not to reveal where. She's writing a book about her mob years, hoping Hollywood buys the book and makes the movie. Andrea dreams of hits and killings of a different sort now. She also got unmarried to her mobster, and imagines a family life without wiseguys.

"I look at it now. I have a daughter, OK? If my daughter would bring me home one of those guys, I'd probably today, knowing what I know, I would disown her. I really, really would," Giovino says. "Because I think that the media and the public does not know the real impact behind the lifestyle. And where it leads you and what it brings you - which is a lot of trauma, a lot of heartache, a lot of pain."

Like Andrea, Tony seems headed for a lot of heartache and pain. As we saw last season, the feds are closing in on him, getting ready to destroy "That Thing Of His." Still, it's not the reality of mob life that Americans love, it's the mobster's image - the image of a fearsome guy who plays by his own rules, but deep down has our values, even when he kills.

Eric Dezenhall writes articles and novels about the mob. He thinks he knows why so many Americans are fascinated by mobsters. "Tony Soprano will rob you. He will kill you. But he will not trick you. And the thing that Americans hate is to be tricked," says Dezenhall.

"My personal theory is we do not admire what mobsters do, but we miss the days where we could say, 'Capone, bad guy, Jesse James, bad guy.' now we've got Enron, we've got politicians, we've got Catholic priests under fire, for God sakes. And Americans are overwrought by the hypocrisy. The way to really upset an American is hypocrisy, as opposed to doing bad things, which we could forgive, providing you have the integrity to be honest about the fact that you're a criminal."

That's what Andrea has - the integrity to be honest about her criminal past, to come clean. Like Gotti, she was part of the old mob and the old mob is gone. But the myth of the mob endures, which is why the Sopranos is so popular, and why Andrea's story is so compelling.

But even so, does she ever yearn, just a little, for the bad old days?

"Well, I don't have the lifestyle I used to have with the money and all," she says. "I like nice things. I always liked nice things. But I don't miss that because there's a consequence to that. No, I think my values are very much intact today. I think if you offered me $50 million, I could look at you and say, 'Go away.'"