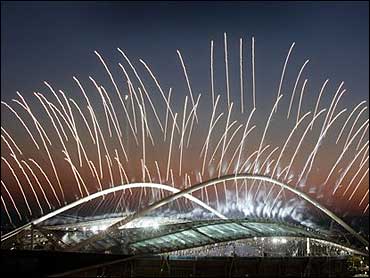 With five rings ablaze in the middle of a manmade sea, the Olympics returned to its birthplace Friday in an epic homecoming heralded by a pounding heartbeat, a galloping centaur and an array of Greek gods followed by the world's greatest athletes.

"The Olympic Games: Welcome back to Greece!" an announcer cried to kick off the opening ceremony.

It was a moment many doubted Greek organizers could pull off, after years of worrisome delays and constant pressure to bolster the most expensive security network in Olympic history.

The ceremony also closed an important circle in sports, from the games' innocent rebirth in 1896 to the latest gathering in an age beset by fears of terrorism and instability.

"Greece is standing before you. We are ready. ... We have waited long for this moment," said the games'chief organizer, Gianna Angelopoulos-Daskalaki.

At dusk, a countdown video filled the screen at the Olympic Stadium — whose new weblike canopy was bolted into place only last month. The numbers clicked down from 28: one second for each of the games scheduled since the first modern Olympiad in an all-marble arena in central Athens. Each tick of the clock was accompanied by the amplified sound of a human heartbeat.

In other Olympics developments: