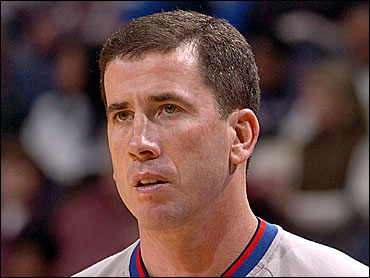 Last summer, NBA referee Tim Donaghy stunned the league by pleading guilty to federal charges he took payoffs from a professional gambler for inside tips on games.

The scandal's final chapter unfolded Tuesday, when a judge sentenced the disgraced referee to 15 months in prison and three years probation. He had faced up to 33 months for his crimes.

Since then, Donaghy has claimed corruption among referees runs deeper, drawing angry denials by the league and demands that he pay hefty restitution. He's also asked for mercy, citing an analysis that found he "would never have committed these offenses if he was not a pathological gambler."

Donaghy, 41, pleaded guilty on Aug. 15, 2007, to conspiracy to engage in wire fraud and transmitting betting information through interstate commerce.

"By having this nonpublic information, I was in a unique position to predict the outcome of NBA games," he told a judge at the time.

Donaghy didn't stop there: In June, he marred the NBA finals by making fresh accusations that the league routinely encouraged refs to ring up bogus fouls to manipulate results but discouraged them from calling technical fouls on star players to keep them in games and protect ticket sales and television ratings.

The allegations - contained in court papers arguing that Donaghy deserved leniency for voluntarily disclosing the alleged corruption - included one instance claiming referees rigged a 2002 playoff series to force it to a revenue-boosting seven games.

Though the papers didn't name the teams involved, however, only the Los Angeles Lakers-Sacramento Kings series went to seven games during those playoffs. The Lakers went on to win the championship.

The letter also alleged manipulation during a 2005 playoff series.

"Team 3 lost the first two games in the series and Team 3's owner complained to NBA officials," the letter said. "Team 3's owner alleged that referees were letting a Team 4 player get away with illegal screens. NBA Executive Y told Referee Supervisor Z that the referees for that game were to enforce the screening rules strictly against that Team 4 player. ... The referees followed the league's instructions and Team 3 came back from behind to win the series. The NBA benefited from this because it prolonged the series, resulting in more tickets sold and more televised games."

In that same series, the letter says "Team 3" lost the first two games of the series and that team owner complained to NBA officials. The letter also alleges that the opposing team's coach later was fined $100,000 after revealing an NBA official informed him of the behind-the-scenes instructions.

That would correspond with the 2005 first-round playoff series between the Houston Rockets and the Dallas Mavericks, in which Mark Cuban complained to officials and Jeff Van Gundy was fined.

Donaghy's letter said that in the first of several meetings with prosecutors and the FBI in New York in 2007, he named names while describing "various examples of improper interactions and relationships between referees and other league employees, such as players, coaches and management." For example, it said, referees broke NBA rules by hitting up players for autographs, socializing with coaches and accepting meals and merchandise from teams.

NBA commissioner David Stern has called the allegations baseless, saying Donaghy was only "singing" to get a lighter sentence. Prosecutors said though he deserved credit for helping make the case against two co-defendants, nothing else he alleged was criminal.

The league had sought nearly $1.4 million in restitution covering hefty legal bills and a portion of Donaghy's salary dating to 2003. But the last week the judge ruled the claim was excessive, instead ordering the three defendants must jointly pay the NBA $217,266 in restitution.

"It is undisputed that Donaghy dishonestly refereed 16 games during the 2006-2007 season, and a corresponding portion of his compensation for these games is an appropriate measure of the NBA's loss," she wrote.

Also charged were two of Donaghy's former high school classmates: James Battista, the professional gambler who paid thousands of dollars for Donaghy's tips, and Thomas Martino, the scheme's middleman. Both men pleaded guilty and were sentenced last week, Battista to 15 months in prison and Martino to a year and one day.