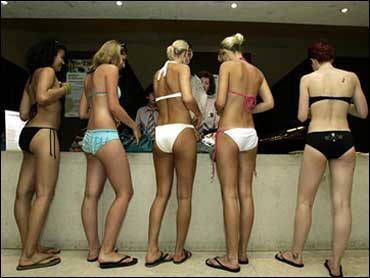 Vienna's prestigious Leopold Museum is usually a pretty buttoned-down place, but on Friday, some of the nudes in its marble galleries were for real.

With a heat wave sweeping much of Europe, pushing temperatures into the mid-90s in Vienna, the museum decided that making the most of its cool, climate-controlled space would spur interest in the show.

"We find a naked body every bit as beautiful as a clothed one," said Elisabeth Leopold, who founded the museum with her husband, Rudolf. "If they came only out of lust, we have to accept that. We stand for the truth."

Peter Weinhaeupl, the Leopold's commercial director, said the goal was twofold — to help people beat the heat while creating a mini-scandal reminiscent of the way the art works by Gustav Klimt, Egon Schiele, Oskar Kokoschka and others shocked the public when they were unveiled a century ago.

"We wanted to give people a chance to cool off, and bring nakedness into the open," he said. "It's a bit of an experiment. Egon Schiele was a young and wild person in his day. He'd want to be here."

Most of those who showed up in little or no attire Friday opted for swimsuits, but a few hardy souls dared to bare more. Among them was Bettina Huth of Stuttgart, Germany, who roamed the exhibition wearing only sandals and a black bikini bottom.

Although she used a program at one point to shield herself from a phalanx of TV cameras, Huth, 52, said she didn't understand what all the fuss was about.

"I go into the steam bath every week, so I'm used to being naked," she said. "I think there's a double morality, especially in America. We lived in California for two years, and I found it strange that my children had to cover themselves up at the beach when they were only 3 or 4 years old. That's ridiculous."

For years, the Austrian capital has been known for a small but lively nudist colony on the Donauinsel, an island in the middle of the Danube River where people disrobe, often startling unsuspecting joggers and cyclists who happen upon them.

Overwhelmingly Roman Catholic Austria has always been somewhat more conservative than many other European countries. The Viennese were scandalized when native art nouveau masters like Klimt — best known for his sensuous "The Kiss" and the subject of an upcoming film starring John Malkovich — began producing works some critics panned as "indecency," "artistic self-pollution" and borderline pornography.

The 180 works on display at the Leopold through Aug. 22 include Klimt's "Nude Veritas," an 1899 painting of a naked young woman with wildflowers in her hair, and Schiele's "Two Female Friends," a 1915 rendition of two nude women entangled in each other's arms.

Max Hollein, director of Frankfurt's Schirn Kunsthalle art museum, likened the public uproar at the time to "the visible outcry at the live transmission from last year's Super Bowl when, for a few seconds, CBS broadcast shots of the singer Janet Jackson's exposed nipple."

Mario Vorhemes, a 20-year-old Vienna resident who strode into the Leopold on Friday wearing nothing but a green and black Speedo, was nonchalant.

"What's the big deal?" he asked. "We're born naked into this world. Why can't we walk around in it without clothes from time to time?"

Elina Ranta, a fully clothed tourist from Finland who checked out the art — and the audience — left amused.

"I thought, 'This is strange. How is this possible in a museum?"' Ranta said. "We've been in many galleries and I've never seen people walking around like this."