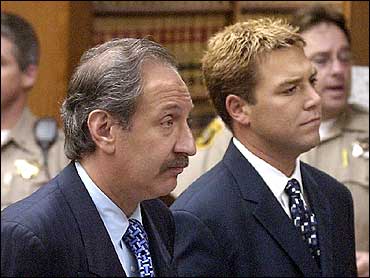 Scott Peterson's attorney is asking a judge to lift his gag order, saying it is unconstitutional and had already failed to muffle the lawyer representing his client's former girlfriend.

In court papers, defense lawyer Mark Geragos asked that Gloria Allred, who represents Amber Frey, who had a relationship with Peterson before his pregnant wife vanished, be found in contempt for violating the order.

Geragos said Allred violated the order five hours after it was issued by discussing his tactics on the Fox News Channel's "On the Record."

Allred said Monday that the order bars potential witnesses, such as Frey, from commenting, but does not apply to lawyers for witnesses.

"I think that this is an attempt to silence me. And there is no merit to the argument that they're making," Allred said. "The protective order clearly does not cover me, and Mark Geragos knows that because he has received a copy of it.

"This tactic appears to try to deflect attention away from his client who is charged with a double homicide and put others on trial instead," she said.

Girolami cited widespread publicity about the case in issuing his order. Without it, the judge said "rumors and gossip would be rehashed shortly before trial thereby making it extremely difficult to select a fair and impartial jury."

Prosecutors had asked for a limited gag order. At the time, Geragos responded that such a ruling would harm his ability to defend his client.

"The people who actually know what the facts are end up kind of being muzzled, if you will," he said.

Allred also opposed the order, as had an attorney representing newspapers and broadcasters.

Scott Peterson, 30, faces the death penalty if convicted of the murders of Laci Peterson and their unborn son. The fertilizer salesman has pleaded innocent and Geragos said he is seeking the real killers.

The remains of the 27-year-old substitute teacher and her unborn son washed ashore in San Francisco Bay in April near where her husband said he was fishing on Christmas Eve when she disappeared.