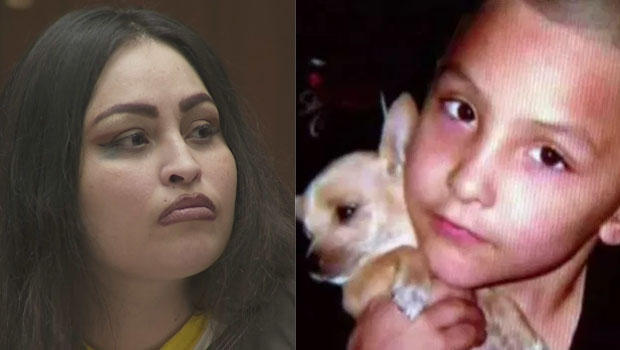 LOS ANGELES -- A judge sentenced a California mother to life in prison Thursday and gave her boyfriend the death penalty in the "beyond animalistic" killing of the woman's 8-year-old son, who prosecutors say was punished because the couple believed he was gay. Los Angeles County Superior Court Judge George Lomeli told the couple that he hopes they wake up in the middle of the night and think of the injuries they inflicted on 8-year-old Gabriel Fernandez of Palmdale.

Gabriel was repeatedly beaten, starved, tied up, locked in a cabinet, shot with a BB gun and once had his teeth knocked out with a bat, the judge said. Court records also detailed that Gabriel had been doused with pepper spray, forced to eat his own vomit and locked in a cabinet with a sock stuffed in his mouth to muffle his screams, according to CBS Los Angeles.

"It is unimaginable the pain that this boy probably endured," Lomeli said.

The boy also had a fractured skull, broken ribs and burns across his body.

"It goes without saying that the conduct was horrendous and inhumane and nothing short of evil," Lomeli said. "It's beyond animalistic because animals know how to take care of their young."

Gabriel's mother, 34-year-old Pearl Fernandez, pleaded guilty to murder in February in the death of her son in exchange for a sentence of life in prison without the possibility of parole, reports CBS Los Angeles. A jury found her boyfriend, 37-year-old Isauro Aguirre, guilty of murder last year and found that he intentionally tortured the boy.

Fernandez called 911 on May 22, 2013, to report that her son wasn't breathing. She told responding deputies that he had fallen and hit his head on a dresser.

When paramedics arrived, they found Gabriel naked in a bedroom, not breathing, with a cracked skull, three broken ribs and BB pellets embedded in his lung and groin.

Gabriel's siblings testified that Fernandez and Aguirre would call the boy gay, punish him if he played with dolls and forced him to wear girls' clothes to school.

Gabriel's first-grade teacher, Jennifer Garcia, tearfully addressed the court ahead of Thursday's sentencing, saying she thinks of him every day and how he just wanted to be loved.

"I find comfort in believing he is now at peace," Garcia said. "And I know that unlike him, his abusers will never have peace. They will have a lifetime of suffering to endure, and I know I'm not alone in hoping they experience the same abuse in their lifetime and worse. They are evil people for what they did."

Gabriel's biological father, who is serving time for robbery, was also present at the sentencing hearing, but declined to speak. He watched the sentencing from his cell, reports CBS Los Angeles.

An expressionless Fernandez spoke briefly during the court hearing, saying she was sorry and wished Gabriel was alive. She also criticized family members who have spoken of their grief over Gabriel, saying they just want fame.

A jail chaplain who has met with Fernandez told the court that she loved her son and is a different woman today than when she walked into jail.

Several agencies investigated abuse allegations leading up to Gabriel's death. Garcia, the teacher, had called authorities to report that the boy had asked her if it was normal for a mother to hit her children with a belt, reports CBS Los Angeles.

On several occasions, investigators concluded there was no evidence of abuse.

Prosecutors have since filed charges of child abuse and falsifying records against four county social workers in Gabriel's death.