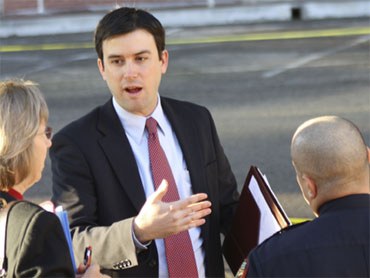 Ross Zimmerman, the father of Gabe Zimmerman, Rep. Gabrielle Giffords' director of community outreach who was killed in the shootings in Tucson Saturday, released a statement regarding his son's death.

It reads, "As I write this, my fine strong younger son, Benjamin, Gabe's fiance Kelly and others are leaving to attend tonight's memorial mass. We are keenly aware of all the other families struggling with lost loved ones.

"But my fine strong son Gabriel is nowhere to be seen. His earthly presence is manifest only as the shadow on our hearts. When I told my wife Pam, Gabe's stepmother, that I found myself listening to the song Forever Young, she commented that Gabe had been given a terrible gift. He will never grow old. She, Gabe's mom Emily, and I will always remember him as our 30-year-old son, with everything ahead of him.

"But Gabe's fiance will never get to finish the wedding plans. There will be no children to raise. They won't grow old together. I told Kelly she is our daughter; that will never change. We all must celebrate 30 wonderful years of Gabe's life, but Kelly's path is very difficult. Since she's one of the strongest people I've ever met, I'm very hopeful. She and Gabe were truly matched.

"I've told many people that Gabe's extraordinary gifts showed even when he was a small child. It took his death to help me realize my son was a genius of sorts. A genius in the breadth and reach of his love and kindness, not mental gymnastics. I was struck when I first met Gabrielle how much she wanted to connect with people, to do what was right for them. I am pleased that Gabe contributed to her work."

Gabe Zimmerman handled thousands of issues raised by constituents out of the congresswoman's offices in Tucson and Sierra Vista. He was one of the Giffords staffers who organized many public events where voters could meet Giffords and talk to her about issues. Co-workers say Zimmerman, who had a master's degree in social work, cared passionately about helping people. Zimmerman's mother, Emily Nottingham, said politics was a good fit for him because it combined policy and making a difference for others. "He had a real interest in helping people and had a real caring for social justice," Nottingham said.