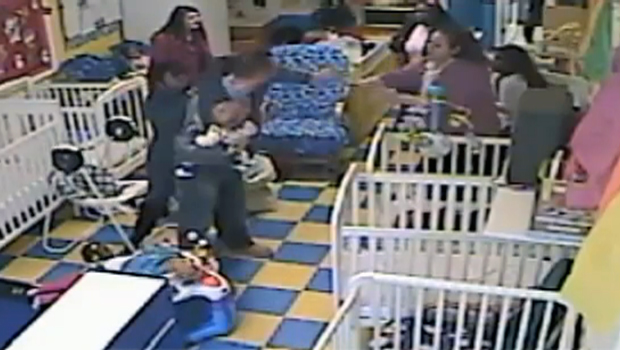 MCDONOUGH, Ga. -- State investigators are looking into a report of a fight at a suburban Atlanta day care center after a surveillance video was aired on WSB-TV, reports CBS Atlanta.

The video, from the McGarity School of Prep, shows the owner, another worker and a parent hitting each other in a room full of babies.

A parent tells the station that the owner attacked him while he was holding his 1-year-old son and would not let him leave the property.

But police say it was the parent, David Gray, who threw the first punch.

“He was in such a rage when he went back there. The reason I say that is he walked by his own child a couple of times,” said Detective Thomas Spangenberg of the Decenber 2012 incident.

Authorities say Gray was upset that his child had been suspended from the day care center.

The owner, Ericka Broadway, tells WSB-TV that she was defending herself after Gray slapped her, and that she was fearful for herself and the children in the center.

Gray was arrested after the incident, but the charges have recently been dropped.

A Georgia Department of Early Care and Learning spokesman says this is the first time they are hearing about the incident and promise a full and complete investigation.